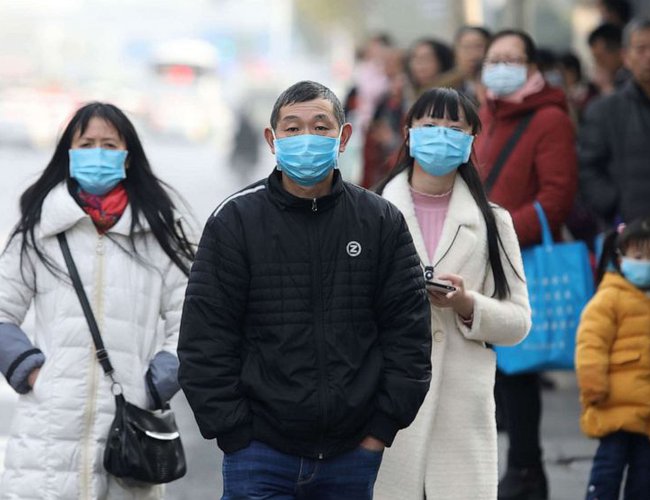 With growing numbers of Chinese tourists visiting Nepal and detection of infected Nepali students and 3 others in observation, Nepal is taking several steps to prevent the spread of disease.

China is stepping up efforts to tackle a new coronavirus that is thought to have originated in a Wuhan seafood market.

These viruses are transmitted between animals and people. SARS, for instance, was believed to have been transmitted from civet cats to humans while MERS traveled from a type of camel to humans.

Several known coronaviruses are circulating in animals that have not yet infected humans. The name coronavirus comes from the Latin word corona, meaning crown or halo. Under an electron microscope, the image of the virus is reminiscent of a solar corona.

A novel coronavirus, identified by Chinese authorities on January 7 and currently named 2019-nCoV, is a new strain that had not been previously identified in humans.

Little is known about it, although human-to-human transmission has been confirmed.

What are the symptoms?

According to the WHO, signs of infection include respiratory symptoms, fever, cough, shortness of breath and breathing difficulties.

In more severe cases, it can lead to pneumonia, severe acute respiratory syndrome, kidney failure and even death.

The incubation period of the coronavirus remains unknown. Some sources say it could be between 10 to 14 days.

How deadly is it?

Some experts say it may not be as deadly as other types of coronavirus such as SARS, which killed nearly 800 people worldwide during a 2002-2003 outbreak that also originated from China.

MERS, which did not spread as widely, was more deadly, killing a third of those it infected.

Most cases have been reported in China.

As of January 24, Chinese officials said at least 26 people have died, all in Hubei Province, of which Wuhan is the capital. That is also where most of the 830 reported cases are.

Other countries have reported far fewer cases, in the examples below less than 10. These include Thailand; Singapore; Vietnam; Japan; the United States; South Korea; France and Nepal.

All the cases involve people who had either come from Wuhan or been there recently.

What is being done to stop it spreading?

There is no vaccine for the new virus.

Chinese authorities effectively sealed off Wuhan on Thursday, suspending flights and trains out of the city and telling residents they could not leave without a special reason, state media said.

The move was meant to "resolutely contain the momentum of the epidemic spreading" and protect lives, the central city's special command center against the virus said, according to state broadcaster CCTV.

At least 12 other Chinese cities were added to the transport ban on Friday, affecting more than 20 million people.

Chinese authorities have also stepped up monitoring and disinfection efforts in advance of the Lunar New Year break.

Airport authorities from Asia and the Middle East to Europe and the US are also screening passengers.

Where did the virus originate?

Chinese health authorities are still trying to determine the origin of the virus, which they say came from a seafood market in Wuhan where wildlife was also traded illegally.

The WHO also says an animal source appears most likely to be the primary source of the outbreak. Snakes - including the Chinese krait and the cobra - may be the source of the newly discovered virus, according to Chinese scientists. 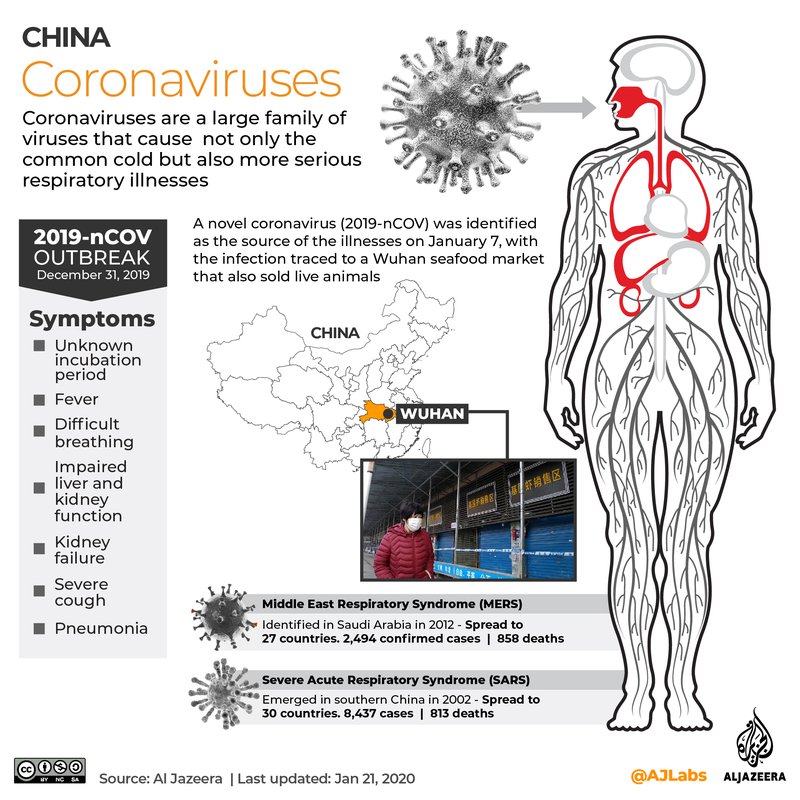 There is evidence of respiratory transmission of the virus from patient to patient and Chinese authorities have said 15 medical staff in the country have been infected.

Experts worry when health workers get sick during new outbreaks because this can suggest the disease is becoming more transmissible and because spread in hospitals can often amplify the epidemic.

Is this a global emergency?

The outbreak does not yet constitute a global emergency, the WHO has said, urging China to keep its lockdown "short".

WHO chief Tedros Adhanom Ghebreyesus told reporters that the decision to hold off on issuing the declaration used for the gravest epidemics should not be taken as a sign that the body does not think the situation is serious.

"This is an emergency in China, but it has not yet become a global health emergency," he told reporters.

Some types of them are serious, though. About 858 people have died from Middle East respiratory syndrome (MERS), which first appeared in 2012 in Saudi Arabia and then in other countries in the Middle East, Africa, Asia, and Europe. In April 2014, the first American was hospitalized for MERS in Indiana and another case was reported in Florida. Both had just returned from Saudi Arabia. In May 2015, there was an outbreak of MERS in Korea, which was the largest outbreak outside of the Arabian Peninsula. In 2003, 774 people died from a severe acute respiratory syndrome (SARS) outbreak. As of 2015, there were no further reports of cases of SARS. MERS and SARS are types of coronaviruses.

The symptoms of most coronaviruses are similar to any other upper respiratory infection, including runny nose, coughing, sore throat, and sometimes a fever. In most cases, you won't know whether you have a coronavirus or a different cold-causing virus, such as rhinovirus.

You could get lab tests, including nose and throat cultures and blood work, to find out whether your cold was caused by a coronavirus, but there's no reason to. The test results wouldn't change how you treat your symptoms, which typically go away in a few days.

But if a coronavirus infection spreads to the lower respiratory tract (your windpipe and your lungs), it can cause pneumonia, especially in older people, people with heart disease, or people with weakened immune systems.

What to Do About Coronavirus

There is no vaccine for coronavirus. To help prevent a coronavirus infection, do the same things you do to avoid the common cold:

Wash your hands thoroughly with soap and warm water or with an alcohol-based hand sanitizer.

Keep your hands and fingers away from your eyes, nose, and mouth.

Get plenty of rest.

Take over-the-counter medicine for a sore throat and fever. But don't give aspirin to children or teens younger than 19; use ibuprofen or acetaminophen instead.

A humidifier or steamy shower can also help ease a sore and scratchy throat.

a general feeling of being unwell

Your healthcare provider may order laboratory tests on respiratory specimens and serum (part of your blood) to detect human coronaviruses. Laboratory testing is more likely to be used if you have severe disease or are suspected of having MERS.

If you are experiencing symptoms, you should tell your healthcare provider about any recent travel or contact with animals.

Credit: Aljazeera and other medical websites

India Records 3.29 Lakh Cases In A Day, More Recoveries In 2 Months By Agencies 18 hours, 29 minutes ago

WHO Keeps Eye Out For Variant Found In India By Agencies 1 day, 2 hours ago