India To Celebrate Republic Day In A Grand Republic Parade

India To Celebrate Republic Day In A Grand Republic Parade 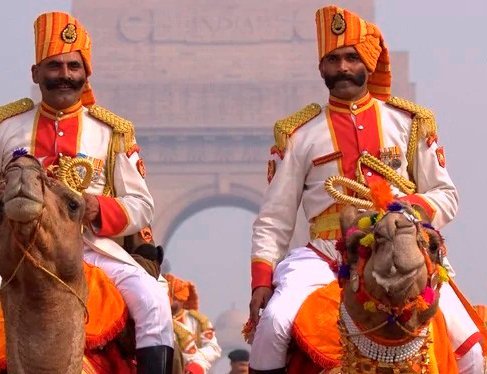 On Republic Day, India formally adopted the Constitution and became an independent republic. To celebrate this day, the President's bodyguard, a 200-strong cavalry unit -- draped in fine red coats, golden sashes and resplendent turbans -- escort the president to the stage at the Republic Day parade and give the order for the national anthem to begin.

Attended by world leaders and beamed across the nation of 1.3 billion, the Republic Day parade in New Delhi showcases India's military might and is the premier state event of the year.

The Republic Day flypast will comprise 41 aircraft of the Indian Air Force and four helicopters of the Army's aviation arm. The aircraft types include 16 fighters, 10 transport aircraft and 19 helicopters. The flypast will be conducted in two phases.

New Delhi: On 71st Republic Day, newly-inducted stealth attack helicopter Apache and transport helicopter Chinook will take part in the Republic Day flypast for the first time. A model of Rafale jet will be showcased as part of the Indian Air Force tableau.

The Republic Day fly past will comprise 41 aircraft of the Indian Air Force and four helicopters of the Army's aviation arm. The aircraft types include 16 fighters, 10 transport aircraft and 19 helicopters. The flypast will be conducted in two phases.

Leading the ceremonial parade would be the "Ensign" formation comprising four Mi-17 V5 helicopters in an inverted "Y" formation, also referred to as the "wineglass formation".

They will flypast the dais, trooping the national flag and the ensigns of the three services. They will be followed by "Dhruv" formation, comprising four Advanced Light Helicopters (ALH) of the Army Aviation.

The Chinook, twin-engine, tandem rotor is a multi-role, vertical-lift platform, which is used for transporting troops, artillery, equipment and fuel.

The helicopter can carry out military operations not only during the day but also at night too.