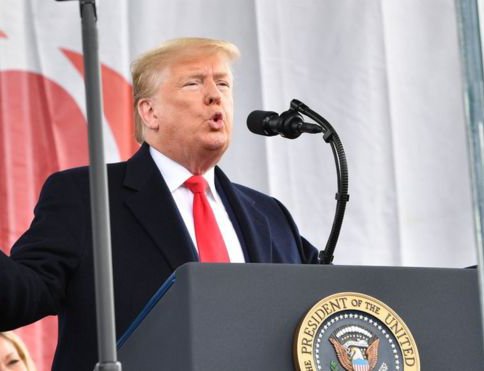 He addressed thousands of protesters at the March for Life near the US Capitol where his impeachment trial is ongoing.

President Trump said: "We're here for a very simple reason: to defend the right of every child born and unborn to fullfil their God-given potential."

The annual demonstration first began in 1974 - a year after the US Supreme Court legalised abortion in Roe v Wade.

Until now no president had ever attended the march, which takes place just steps from the White House, though previous Republican presidents, including George W Bush and Ronald Reagan, have addressed the group remotely.

Mike Pence became the first sitting vice-president to attend the rally in 2017. President Trump's appearance at the 47th March for Life delighted protesters.

Voters who support limiting abortion make up a key constituency for Mr Trump, who is seeking their support at the polls again in the 2020 election.

On Friday, marchers in Washington shouted "four more years" and "we love you".

On the streets surrounding the National Mall vendors selling Trump flags and Make America Great Again hats were aplenty. Many of the attendees sported pro-Trump merchandise, though for some, there was a distinction between liking the president and liking his anti-abortion stance.

"I'm not necessarily pro-Trump, but I appreciate that the President of the United States is making the move to be here."

She added that she was unhappy at all the focus on Mr Trump as opposed to the issue. "Until the day we can see Roe v Wade switched, [the movement] will continue, whether he's president in the next election or not."

Chuck Raymond, a financial advisor in St Louis, said: "Without a doubt, he is the most pro-life, pro-family, pro-religious freedom president we've ever had."

Mr Trump's appearance on Friday has already made a difference for some voters. Jose Sandoval, who drove nine hours from Knoxville, Tennessee, to participate in the march, said he did not vote for Mr Trump in 2016, but his attendance has changed Mr Sandoval's mind for 2020.

Mother-daughter pair Marci and Jeanette Houle had a similar journey down to the capital - 10 hours in a bus from New Hampshire. Marci said they appreciated that the president was backing up his anti-abortion stance with his presence.

In 2016, 81% of Evangelical voters - a group for whom abortion is the biggest political issue - backed Mr Trump for president. He has continued to court them as his re-election campaign ramps up.

March for Life president Jeanne Mancini said Mr Trump and his administration "have been consistent champions for life".

But pro-choice groups said his appearance was a distraction tactic.

Ilyse Hogue, the president of NARAL Pro-Choice America, said it was "a desperate attempt to divert attention from his criminal presidency and fire up his radical base".