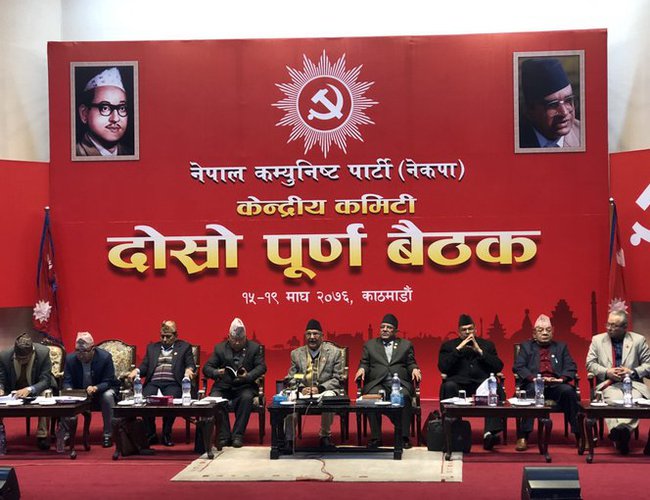 Nepal Communist Party (NCP) Chairman and Prime Minister KP Sharma Oli said that the government is moving forward by following the standards set forth by the United Nations Charter and other international institutions.

Highlighting the work done by the government, PM claimed that the government is heading towards right directions fulfilling all its duties. He said that the country’s economy is sound with the growth of over 6.5 percent and development process has accelerated.

Prime Minister Oli said that some forces are making wrong allegations against us. He urged members of the NCP central committee to publicise the efforts and achievements of both- the government and the party.

Inaugurating the second meeting of NCP central committee, Oli said the party was moving forward by to make Nepal happy and prosper.

“Democracy is a basic principle of our party and we fully committed to protections of human rights and freedom of people,” said Prime minister Oli. He directed party workers to visit people and disseminate the good work done by the Government/

Prime Minister Oli boasted that Nepal has improved its rank in various international rankings during his two years tenure as prime minister.

DAOs Extend Prohibitory Order In Kathmandu Valley Till May 26 By Agencies 6 hours, 53 minutes ago

Kathmandu Valley Will Be Under Prohibitory Order For 15 Days By Agencies 1 day, 3 hours ago

Nepal Airlines To Send Its A330 Aircraft To China To Bring Medical Equipment By Agencies 3 days, 12 hours ago