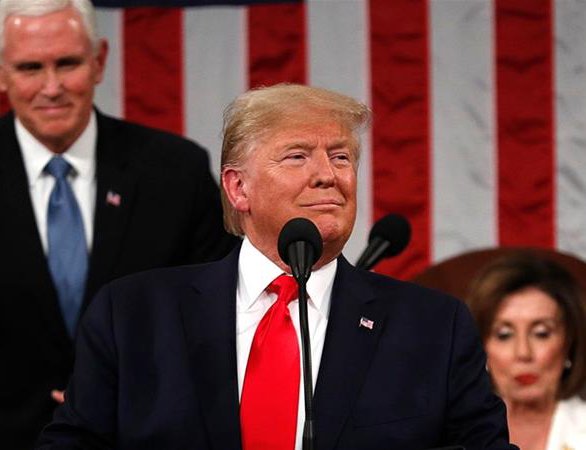 President Donald Trump has hailed the "great American comeback" in a speech to Congress on the eve of his expected acquittal in his impeachment trial.

At his annual State of the Union address, Mr Trump set out a case for another four years in office.

The president refrained from lashing out directly at the lawmakers who have attempted to remove him from office, though he did jab at Democrats.

House Speaker Nancy Pelosi ripped up a copy of his speech at the dias.

The Republican president delivered Tuesday night's nationally televised speech in the Democratic-controlled US House of Representatives, where he was impeached in December.

On the other side of the Capitol, the Republican-led Senate is all but certain on Wednesday to clear the president of corruption charges in a party-line vote.

Rockets Rain On Tel Aviv As Violence Expands By Agencies 7 hours, 48 minutes ago

Concerns Rise Over Tensions In Jerusalem By Agencies 1 day, 7 hours ago