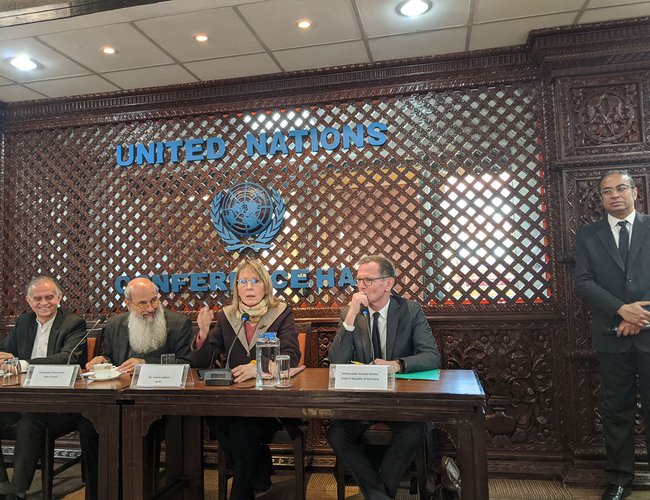 As British Prime Minister Winston Churchill said those who fail to learn from history are doomed to repeat it. His remarks made in British Parliament 75 years ago following the world war second are valid now as they were then.

Seventy five years have already passed since the end of the second world war and people around the world commemorate the 75th anniversary of the liberation of Auschwitz-Birkenau, to remember the six million Jews and many others who were murdered by the Nazis and their collaborators during the Holocaust, and to re-commit to preventing any repetition of those crimes.

However, the trend against the crime against humanity continues. For Nepal which faced heinous 12 years long violent civil war, remembering history of Holucaust is highly significant.

Although Nepal took part in the second world war fighting against Nazis's forces, many younger children do not have any memory about Nepal's role in second war and atrocities of Nazis against Jewish people.

Nepal's former prime minister B.P. Koirala, in his nobel Yehudi Ra Hitlar (Jews and Hitler) described the terror of Hitler and crime committed by him against humanity. The book is used at higher education level.

Realizing the importance of teaching the students the history of Holocaust, Nepal government has decided to make Holocaust a part of the curriculum in schools of Nepal.

With this spirit, Holocaust Day was commemorated by students from 25 schools of all three cities with one common message of Humanity and Interconnectedness for the first time in Nepal. 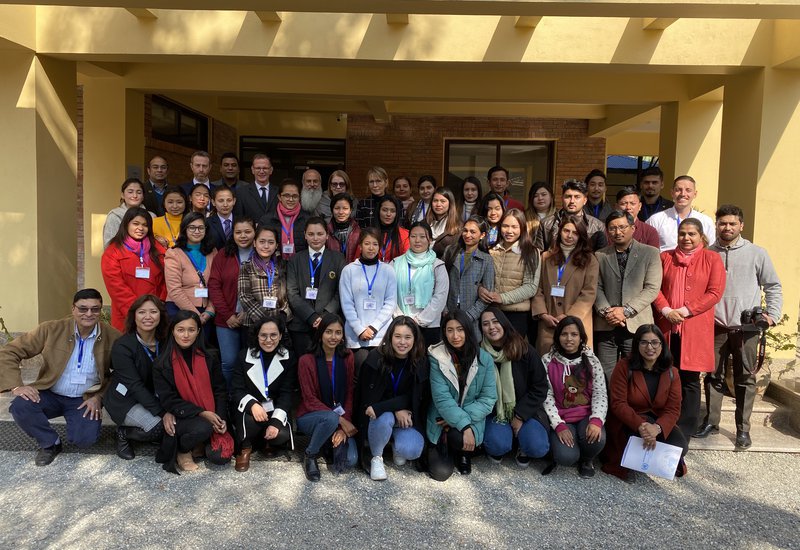 The month-long observation concluded with a memorial ceremony hosted by the German Ambassador, Roland Schafer. The memorial ceremony, attended by the representatives of the Nepali Government, the diplomatic community and civil society, the United Nations Resident Coordinator, Ms. Valerie Julliand and the Chargé d’affaires of the delegation of the European Union, Bashkim Bituci shared their remarks on the victims of the Holocaust. Likewise, Ambassador for Israel, Benny Omer, recited the Yizkor prayer in honor of all those who suffered during the Shoa.

After thanking the UN Volunteers for their work in Nepali schools, ambassador Roland Schäfer added, “all democratic governments currently face the challenge to find the right balance between banning hateful content and preserving the freedom of speech. Anywhere, and in Nepal, governments are well advised to listen very carefully. Listen to the young people who need to be protected from discrimination and at the same time need to express their opinion freely. Listen to the experts who all over the world, work on carefully crafted laws and trying to protect citizens from both pitfalls.”

UN Resident Coordinator Valerie Julliand highlighted the importance of understanding the history. “Understanding our history connects us to the essential human values of truth, respect, justice and compassion. As these values are still being threatened from all sides, we must reaffirm them more strongly than ever and stand every day and everywhere against anti-semitism, bigotry and hatred of all kinds,” says Valerie Julliand, the United Nations Resident Coordinator.

She said that this is also very important for Nepal which fought war against inequality, exclusion, injustice and discrimination. She said that commemoration of Holocaust in Nepal with engagement of school children is highly significant.

With the support from the Government of Nepal, Ministry of Education Science and Technology, the United Nations Nepal together with the Embassy of Germany, the Embassy of Israel and Delegation of the European Union to Nepal organized a month-long educational outreach program about Holocaust in 15 public and 10 private schools of Kathmandu, Bhaktapur and Lalitpur respectively.

This year marks both the 75th anniversary of the ending of the Second World War and the establishment of the United Nations. Acknowledging 2020 as the milestone year, the theme for Holocaust Remembrance Day is “75 years after Auschwitz - Holocaust Education and Remembrance for Global Justice".

Resonating with the global theme, remembrance and education about the holocaust were at the center of the school outreach programme in Nepal. Various orientation sessions about the Holocaust were conducted amongst the students of higher secondary level as a part of their Social Studies curriculum benefiting around 500 students.

During the school outreach program students were briefed about the horrors that can emerge from discrimination and intolerance and were urged not to stand for injustice and “never again” repeat the acts of genocide anywhere in the world. 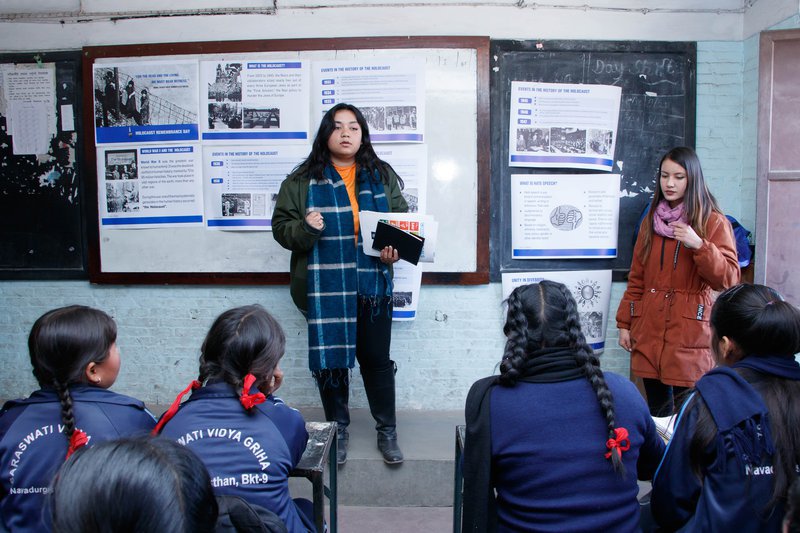 “The purpose of this international day of remembrance is therefore not only to pay tribute to the victims of the Holocaust, but also to encourage us to learn from it so that such horror will never happen again. It's more important than ever at a time that we are witnessing a worrying revival of antisemitism, with social networks as its main vector, where anonymity and lack of control encourage all forms of hate speech and Holocaust denial,” says the Chargé d'affaires of the Delegation of the European Union to Nepal, Bashkim BITUCI.

In order to amplify the awareness about the holocaust, the UN and the three diplomatic missions mobilized 35 youth volunteers pursuing their bachelor’s and master’s degrees to facilitate the school outreach programs.

Prior to the school outreach program, the volunteers were briefed about the history of the holocaust over a period of three days. They also had the unique opportunity to interact with the UN Resident Coordinator, the Ambassadors of the German and Israel Embassies and the European Union Delegation to Nepal over a one on one Q & A session.

"One of the darkest realities in the history of mankind is the Holocaust. Since the theme this year is Holocaust education, together, we must educate our future generation and continue our fight against antisemitism, discrimination and intolerance. We must remember not to repeat the history itself. Our joint responsibility is not over yet," opined the Ambassador of Israel to Nepal Benny Omer.

Despite so many changes, there is resurgence of antisemitic attack around the world.

"Our solidarity in the face of hatred is needed today more than ever, as we see a deeply worrying resurgence in antisemitic attacks around the world, and almost unbelievable, also around us here in New York," said António Guterres, Secretary-General of the United Nations.

Showing a grim picture, he said, "New York saw a 21 percent rise in antisemitic hate crimes in 2019, part of a trend in cities across the United States. But, the situation for Jews in Europe is, if anything, worse. France saw a 74 percent increase in antisemitic attacks in 2018. In the United Kingdom, they rose by 16 percent to a record high."

An attack on a synagogue in the German town of Halle during Yom Kippur last October left two people dead. In Italy, an 89-year-old Holocaust survivor was provided with an armed escort after she suffered a torrent of antisemitic abuse.

We need to name this phenomenon for what it is: there is a global crisis of antisemitic hatred; a constant stream of attacks targeting Jews, their institutions and property.

Almost every day brings new reports of hate crimes. Many of the perpetrators are inspired by previous attacks, glorifying the assailants and creating a self-reinforcing vortex of violence.

Neo-Nazis and white supremacists are resurgent, organizing themselves and spreading their poisonous ideology and iconography online. The internet, from social media to online gaming platforms and the dark web, is their playground and their recruiting office. They manipulate video content and poison young minds.

This upsurge of antisemitism cannot be seen in isolation from an extremely troubling increase in xenophobia, homophobia, discrimination and hatred in many parts of the world, targeting people on the basis of their identity, including race, ethnicity, nationality, religion, sexual orientation, disability and immigration status.

Attacks against religious minorities are a particular concern. Around the world, we have seen Jews murdered in synagogues, their gravestones defaced with swastikas; Christians killed at prayer, their churches torched; and Muslims gunned down in mosques, their religious sites vandalized.

As the former Chief Rabbi of the United Kingdom, Jonathan Sacks, has said: “The hate that begins with Jews never ends there.”

Seventy-five years ago today, when the soldiers of the Soviet army entered Auschwitz, they were stunned into silence by what they saw. The Nazis’ efforts to hide their crimes were undermined by the clear evidence of millions of pieces of clothing and tons of hair. To quote Primo Levi, the liberators felt “guilt that such a crime should exist”.

The most important lesson is that the Holocaust was not an aberration committed at a particular moment in history by a few unspeakably sick people.

As Will Durant says, “So the story of man runs in a dreary circle, because he is not yet master of the earth that holds him.”