The policy dialogue gave some fruitful insights and also raised some issues regarding making policies to mitigate water crisis in Nepal. 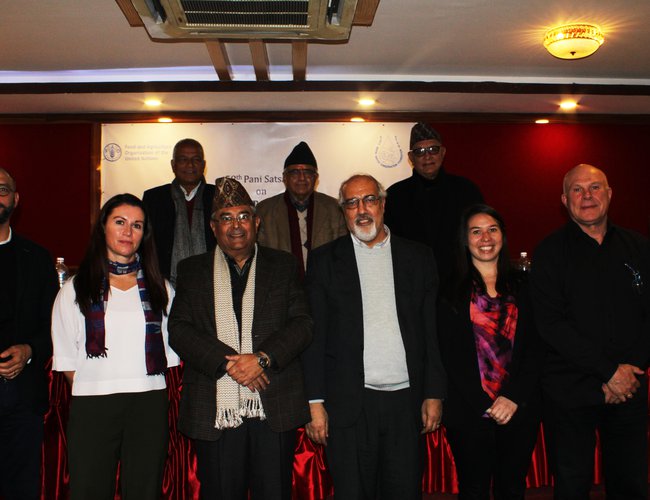 Nepal Water Conservation Foundation organized its 58th regular Paani Satsang (Policy Dialogue on Water Policy) here in the capital on 17th January, 2020 in partnership with Food and Agricultural Organization (FAO). This time the theme was “Policies and tools to counter water scarcity in Nepal”. Different dignitaries including ex-ministers from various political parties participated in the event. The policy discourse was successful in making participants clear on one aspect; Nepal is not a water-rich country.

He however said that the water stress in Nepal is not the worst in South Asia, but can get worse if not managed properly.

According to Hugh Turall, another presenter from FAO, before making policies and priorities for dealing with water crisis situation we need to have proper knowledge regarding water balance in different parts of Nepal. Water balance is the science of knowing how much water do we have in every interval of time? And how much do we need in those intervals of time? If we have a proper knowledge of the water balance, then proper instruments can be constructed to deal with water crisis, he said. He also said that Nepalese water has a transboundary aspect, which is making the situation more complicated.

Jonna Van Opstal of Netherlands said that based on research, one of the solutions which has been effectively put into practice is drip irrigation. She urged the policy makers of Nepal to give priorities to drip irrigation which can conserve water upto 70%.

The policy dialogue gave some fruitful insights and also raised some issues regarding making policies to mitigate water crisis in Nepal. Uddhav Raj Khadka of TU said that the flood plain which was water storage tanks has been over populated. Now the water storage has deteriorated due to over pumping. Therefore groundwater pumping is not sustainable which should be directed to the policy. 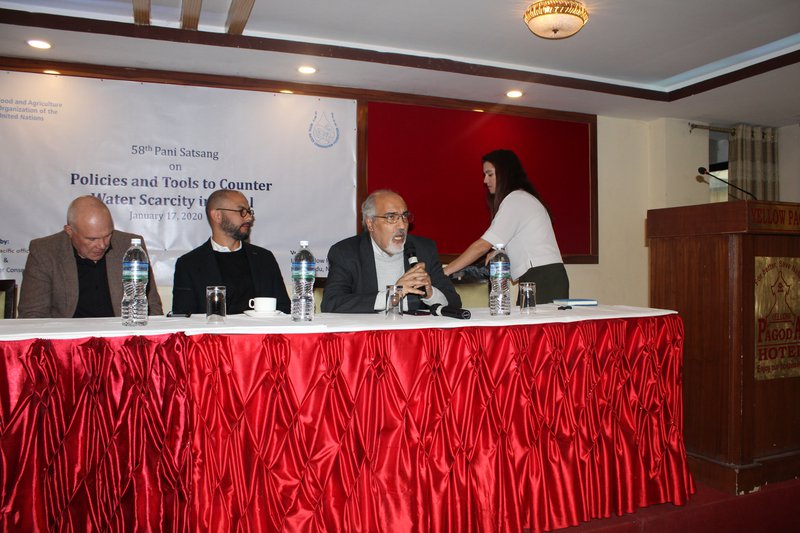 Dr. Prakash Chandra Lohani, a former minister, was concerned about Nepal becoming water stressed nation. He said that poor management, inadequate investment and inefficiency in water supply system as the major reason behind water scarcity. “25% of water supply in Kathmandu is wasted. In this scenario, we should first recover the leakage,” he said. Citing poor governance as the major reason, he said, “In this scenario of water leakage, even if Melamchi comes, we will still be water stressed.”

Adding to this, Dipak Gyawali, a former minister of water resources said, “Melamchi Water Supply Project was designed when the population was 0.3 million. Now the population is ten times that size”. Ganesh Shah, a former minister from Nepal Communist Party (NCP) said that rainwater harvesting should be given due priority and brought into policy formation. If there is proper policy regarding rainwater harvesting then, the water scarcity problem can be mitigated to some extent.

Laxman Ghimire, a former lawmaker from Nepali Congress, said that water scarcity is the major reason for migration from his hometown Ramechhap. He said that the water table in Ramechhap has reduced significantly due to deforestation, sand mining etc. Ghimire was concerned about migration towards the urban areas which hampers the water table of the urban areas further. He said if electricity subsidy is given to villagers for water supply, irrigation etc. then they may stay back.

Regarding electricity distribution, Bijay Man Sherchan, an entrepreneur who first introduced Electric Vehicles (EVs) in Nepal said, “NEA is paying hydro developers Rs. 5/ unit whereas selling electricity to the public in 12 Rs/unit. Therefore we should subsidize electricity between 9AM and 5 PM where there is very less electricity consumption.”

The participants also raised the issue of water conflict between states regarding use of the resource. Santa Bahadur Pun, a former government executive said “If Kathmandu is using Melamchi, then Kathmandu should pay to Sindhupalchowk district in order to avoid water conflict,” he said.