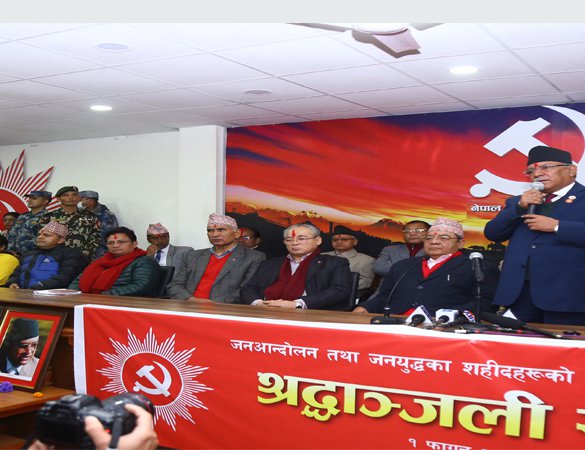 In his address to a rally organized to celebrate People’s War, Prachanda said that he used to have regular telephone conversations with late Koirala and Koirala often request him to go for major attack on security post during the civil war.

“ Girijababu often asked me to go for a major strike to press King and security forces,” said Prachanda. He said that because of Koirala’s strong backing and support was crucial to achieve the desired goal to remove monarchy.

He said that the nation has moved forward to the making of foundation of socialism through peace process, which was established with the backing of people's war and people's movement.

So, the revolution through imitation of people's war was not possible, the former rebel supremo said today while addressing a condolence meet organized at party central office in Dhumrabarahi in memory of martyrs of people's movements and people's war.

As people's war and revolution happen at a historic and special situation on the basis of people's need and leadership's timely ideas, now imitation of people's war was not likely, Prachanda opined, referring to the ongoing politicking of Netra Bikram Chanda 'Biplav'.

He went on to say that the revolution was not something to import or export but it should be looked in a frame of historical needs and ground reality.

During the program that saw the participation of other NCP leaders including Bamdev Gautam, Bishnu Poudel, Ram Bahadur Thapa 'Badal' and Pampha Bhusal, among others, the NCP Chairman recalled the ups and downs travelled during the signing of the historic 12-point agreement between the then CPN (Maoist) and seven political parties.

Also speaking at the program, NCP Vice-Chairman Bamdev Gautam said that Nepal's people's war was a rare and historic incident in the world history adding that the decade long insurgency and people's movement has defeated the feudalism and weakened the imperialist forces.

Nepal Has Suspended All International Flights By May 31 By NEW SPOTLIGHT ONLINE 1 hour, 29 minutes ago

DAOs Extend Prohibitory Order In Kathmandu Valley Till May 26 By Agencies 7 hours, 35 minutes ago