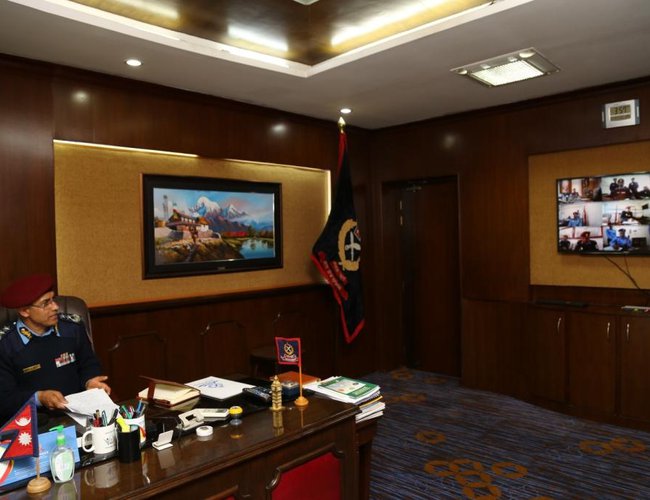 Newly appointed Inspector General of Police Thakur Prasad Gyawaly said that he was proud to serve the nation and people as chief of Nepal Police. Directing the police officers through video conferencing, he said that his entire tenure will be dedicated to make the organization professional and committed to maintain law and order.

Chief of Police Gyawaly expressed his commitment that Nepal Police is guided by the policy directives of the Government of Nepal in line with the principles of human rights, rule of law and citizen supremacy as enshrined in the constitution and prevailing laws. “We are committed to maintaining law and order and bringing to book anyone involved in criminal and destructive activities,” said IGP Gyawaly.

Gyawaly was promoted to top cop as per the decision of the Council of Ministers on 11 February after his predecessor Sarbendra Khanal attained compulsory retirement as per 30-year service limit.

Directing the rank and file of Nepal Police, IGP Gyawaly urged all his colleagues to perform their duties and responsibilities with greater restraint, professionalism, transparency, high morale, motivation and accountability.