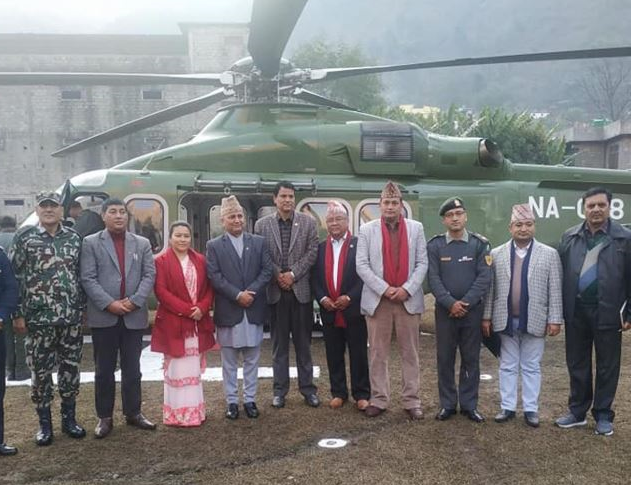 Deputy Prime Minister and Minister of Defense Ishwar Pokharel and his team made the aerial inspection of the encroached Nepali territory reports Rashtriya Samachar Samiti (RSS).

Minister Pokharel was made aware of Indian security posts set up at a distance of three kilometers along the border in Kalapani. He also observed the proposed site for establishing an Armed Police Force's border security outpost (BOP).

According national news agency, the Deputy Prime Minister who had this morning left the district headquarters Khalanga for Kalapani inspected the area by a Nepal Army helicopter as the landing was not possible due to the presence of heavy snow at the site.

Talking to media persons in Khalanga, defense minister Pokharel said security posts on Nepal's border would be added gradually. He said that Nepal had been decided to establish the APF post at Byas for border security. " The government will talk to India about the border issue face-to-face," he said, adding," This is the first time the Nepal Government wrote a diplomatic note to India following the Sugauli Treaty and we will produce evidences that such (encroached) parts are belonged to Nepal."