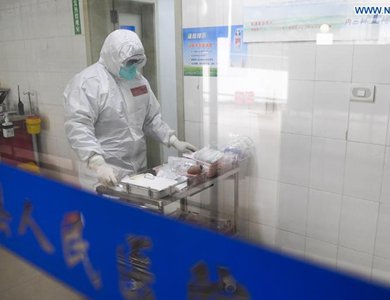 A nurse, her parents and brother in Wuhan, Central China's Hubei Province, epicenter of the COVID-19 outbreak, have died of the fatal virus, the government of Wuhan said on Tuesday.

Liu Fan, 59, a deputy chief nurse of Wuchang Hospital, had been on duty in the injection room until February 2. She was confirmed to have been infected with the novel coronavirus on February 7 after she felt physical discomfort and had a fever, said a post by Wuhan government on Toutiao, a Chinese media platform.

Liu was admitted to hospital on February 7. Because she had a number of underlying diseases in addition to the pneumonia, her condition worsened quickly and died on February 14 after all rescue efforts failed, said the government.

Before Liu's death, her parents and brother had also died of the virus after being infected. Her husband and daughter are under quarantine but have not been found to be infected.

Liu Zhiming, 51, head of the hospital and a neurosurgeon by training, became infected while working to combat the novel coronavirus. He died from the virus on Tuesday morning despite his colleagues' all-out efforts to save his life.

The Wuhan government said that Wuchang Hospital became a designated hospital for fever on January 21 and had suffered from a shortage of medical protective equipment.

However, with help and funding from governments at all levels and sectors of society, equipment has been made available for use by the hospital's medical staff.