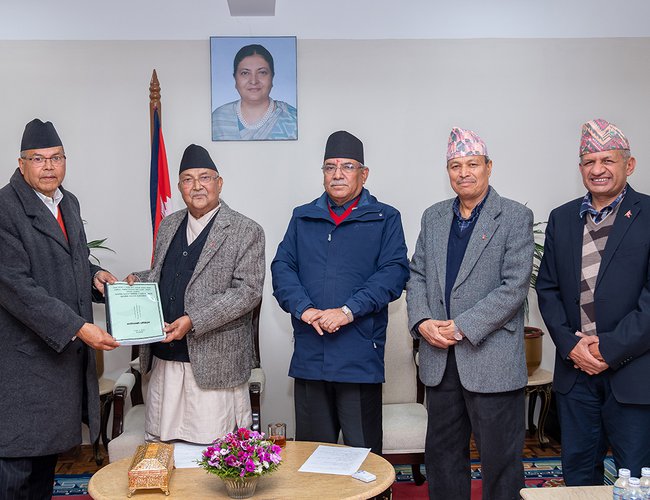 The task force on the Millennium Challenge Account (MCA) Nepal submitted its report to its report to the chairmen duo—KP Sharma Oli and Pushpa Kamal Dahal ‘Prachanda’ of the ruling Nepal Communist Party (NCP) on Friday.

The committee has concluded that the much-hyped grant agreement with the United States of America should not be implement as it was agreed upon.

The task force said that Millennium Challenge Corporation (MCC) – a bilateral US foreign aid agency established by the US Congress during George Bush administration in 2004 – had links with the Indo-Pacific Strategy (IPS).

“The grant agreement must not be executed in Nepal without changing some of the provisions as it can be counterproductive in for the country,” said the leader of the task force and Former Prime Minister Jhala Nath Khanal.

The task force has submitted its report to the chairmen duo—KP Sharma Oli and Pushpa Kamal Dahal ‘Prachanda’ of the ruling Nepal Communist Party (NCP) on Friday.

However, Khanal did not disclose the provisions that needed to be amended in the agreement and said that the content of the report would be made public in three days.

“For the last three weeks, we went through multiple documents related to the agreement and execution procedures and found that there is no mention or link with the IPS,” said Khanal, “But when the people in the US authority said that the both were connected, we cannot ignore it. This has created confusion among the people and leaders”

The task force has also found that some of the provisions in the agreement were already amended through correspondences between Nepal government and MCC.

The report will soon be presented to the Secretariat Meeting of the NCP, following which the amendment will be finalized.

India Provides Grant For The Construction Of New School Building In Butwal By NEW SPOTLIGHT ONLINE 1 day, 4 hours ago

Chanda Led Maoist And The Government To Hold Talks By NEW SPOTLIGHT ONLINE 2 days, 17 hours ago