COVID-19 Begins To Decline In China, Another Outbreak Cannot Be Ruled Out: Chinese Media

COVID-19 Begins To Decline In China, Another Outbreak Cannot Be Ruled Out: Chinese Media 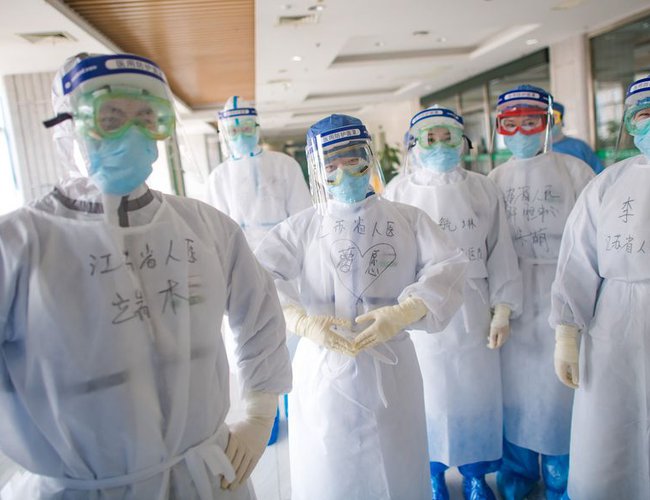 After being home-quarantined for nearly a month, some Chinese people, encouraged by glimmering signs of the relieved spread of COVID-19, began to relax their vigilance and hurried to treat themselves in shopping malls and restaurants.

However, authorities and observers urged it is yet too early to resume the pre-outbreak life, as any relaxation would give rise to increased contagion and roll back the whole country's previous hard-earned achievements in containing the spread of the virus.

China's health commission confirmed 648 new infections - higher than a day earlier - but only 18 were outside of Hubei Province. A total of 21 provinces, municipalities and autonomous regions haven't recorded a single case of a new infection on Saturday, and the number of new confirmed cases outside of Hubei, the epidemic center, has been falling for consecutive days.

After positive signs of controlling the virus emerge, some places began to loosen previous "strictest-ever" control measures, and opened some places to the public, such as restaurants and shopping malls.

Thickly-dotted tea drinkers bathing themselves with sunshine at a town square, large volume retaliatory consumption in a Hangzhou shopping mall, and heavy traffic congestions in Beijing …suggest signs that some Chinese are already indulging themselves in the "victory of the battle against COVID-19."

A Beijing resident, surnamed Mu, went to a small park near his home over the weekend. "My family drew lots to decide who will walk the dog in the residential compound, which has been a rare chance to breathe the fresh air in the past weeks. This weekend we finally decided to hang out in a nearby park, like a prisoner freed from jail," Mu said, noting the dog Yuanbao was even happier.

"I saw more and more people flocking into restaurants and supermarkets these days, and elderly taking on the street without masks on. It seems like those people were eaten up by good news," said Tang Jia, a Shanghai resident.

But observers warned that the infection has not tapered yet, and we haven't formed a complete understanding of the virus, so any relaxation at this stage is quite dangerous, and would cause a secondary wave of infections.

Zhang Wenhong, director of the department of infectious diseases from Shanghai's Huashan Hospital, said that although the possibility of running into a people who contracted the virus is slim at the current stage, the public still should stay alert. Although the situation of viral spreading remains stable, we have yet to "do whatever one desires."

After concerns ignited over the secondary contagion, many local governments again took complimentary measures over the once-relaxed control measures.

Nine officials in Guangyuan, Southwest China's Sichuan Province were punished for failing to correctly evaluate the transmission risk and take precautions after media reported that a large number of people gathered outside a city square to drink tea and chat, media reported on Sunday.

The local government in Guangyuan on Friday reiterated that the province is still under the highest alert regarding the epidemic, and asked residents to stay away from gatherings. The government notice on its website also required business runners to arrange seats at least 1.5 meters away from each other and do disinfection work properly.

US supermarket giant COSTCO moved to restrict daily flow of shoppers to 2,000 people at its Shanghai outlet and required consumers to wear face masks all the time within the supermarket, according to a COSTCO notice on Sunday.

The new measure came after the supermarket received an oral warning from Shanghai's Minhang district government after large crowds of shoppers were found gathering at the store on Saturday.

It is fine to cautiously ease control measures if the tightest measures continue, but the economic and social costs would be tremendous. It is not time to remove the alert, said Zhou Zijun, a professor at Peking University's School of Public Health, noting malls must take methods to restrict crowds and people should not hang out without masks.

Warming weather weakens the virus' activity, but the risk of a new infection still exists. Some isolated small outbreaks may last for another one to two months, Yang Zhanqiu, a deputy director of the pathogen biology department at Wuhan University, told the Global Times on Sunday.

The government should closely monitor the resumption of business in different sectors and halt activities that pose danger to epidemic control, Zhou said, noting that authorities can also release more information and warn residents of the risks.

The hashtag "it is not the time to take off masks and get together" received 120 million views on Sina Weibo, China's Twitter-like platform. Many netizens urged the small group of people not to flock together and waste previous efforts, "don't let those front-line medical workers pay off the price."

Experts also underlined that there is still risk of cluster infections as more companies and business resume operations.

At least 12 collective coronavirus cases have been confirmed in companies after employees returned to work across China, with 15 confirmed infections among employees and 514 people being quarantined, according to media reports.

Different places should make adjustments to policies in accordance with epidemic control. For major cities like Beijing, the pressure remains huge, warned experts, noting that international transportation hubs should be cautious of inflow patients from other countries as the COVID-19 has shown signs of a global epidemic.

Companies had better stop using central air-conditioning and be careful in canteen services. Employers should not ask all staff to return to office, Zhou said.

The key mission for the next phase is to detect and quarantine new isolated cases timely to prevent small outbreaks, he said.

The COVAX Facility Will Deliver Its 65 Millionth Vaccine Dose This Week By NEW SPOTLIGHT ONLINE 9 hours, 57 minutes ago

COVID-19 Is Airborne: Scientists By Agencies 16 hours, 35 minutes ago

COVID CRISIS: Health Alert By A Correspondent 19 hours, 54 minutes ago