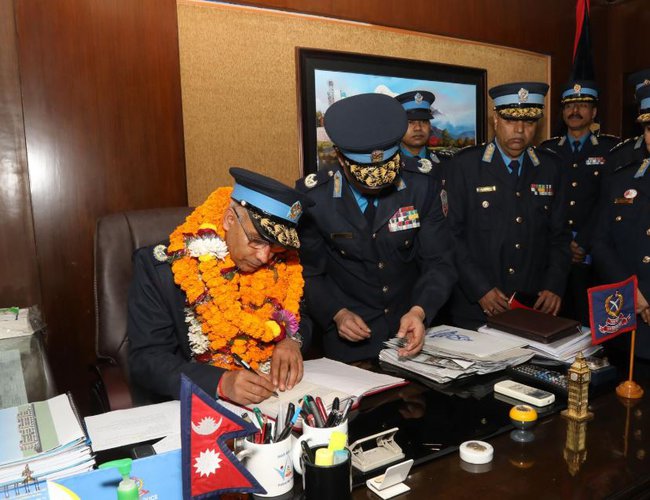 As newly appointed chief of Nepal Police Gyawali, who is known for simplicity and humbleness in his conversation in the entire career in over 29 years in Nepal Police, he maintains his posture even as he got promoted to the top of the rank.

Unlike his predecessors, he did not make tall claims nor made a great promise. What is simple mantra for his entire force of over 70 thousands is to act as per the laws, regulations and traditions maintaining law and order and keeping service in mind.

Newly appointed Inspector General of Police Thakur Prasad Gyawaly said that he was proud to serve the nation and people as chief of Nepal Police. Directing the police officers through video conferencing, he said that his entire tenure will be dedicated to make the organization professional and committed to maintain law and order.

Gyawaly assumed the helm of Nepal Police as IGP on February 12, 2020 following the decision of the Council of Ministers of the Government of Nepal. Having joined Nepal Police as an Inspector on July 9, 1990, he is the 27th Inspector General of Police.

Born on October 14th, 1965 in Pyuthan district, IGP Gyawaly graduated with Bachelor’s Degrees in Humanities and Sociology, Bachelor of Law and Master’s Degree in Sociology. He has also successfully graduated in several specialized police courses in Nepal and abroad.

IGP Gyawaly always has had the reputation for being a diligent and conscientious police officer throughout his career spanning over 29 years. He began his commissioned career as an Inspector from District Police Office, Bajura in 1991.

IGP Gyawaly firmly believes in professional ethics, organizational ethos and discipline that make policing a sacred responsibility. He is regarded as an upright officer who maintains a strong fraternity among the entire Nepal Police family.

Chief of Police Gyawaly expressed his commitment that Nepal Police is guided by the policy directives of the Government of Nepal in line with the principles of human rights, rule of law and citizen supremacy as enshrined in the constitution and prevailing laws. “We are committed to maintaining law and order and bringing to book anyone involved in criminal and destructive activities,” said IGP Gyawaly.

Gyawaly was promoted to be the top cop as per the decision of the Council of Ministers on 11 February after his predecessor Sarbendra Khanal got a compulsory retirement as per the rule of 30-year service limit.

Directing the rank and file of Nepal Police, IGP Gyawaly urged all his colleagues to perform their duties and responsibilities with greater restraint, professionalism, transparency, high morale, motivation and accountability.

If IGP Gyawali's simple mantra translates into reality, it will herald a new beginning in Nepal Police, which has been passing through a crucial period of transition.