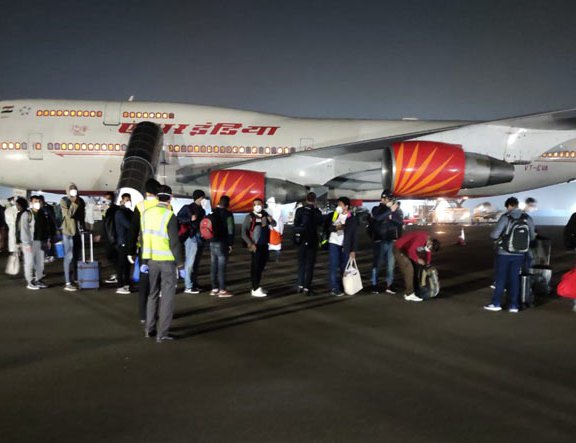 An Air India flight on Thursday brought back to the national capital 119 Indians and five foreigners who were on board a cruise ship, which was docked off Yokohama in Japan and had been hit by the novel coronavirus outbreak.

The foreigners, who were brought back to India on board the special Air India flight included two from Sri Lanka and one each from Nepal, South Africa and Peru.

All the evacuees will undergo a 14-day quarantine at a medical facility set up by the Indian Army in Manesar.

Three Indian crew members did not board the special flight and conveyed their wish to continue their stay on board the cruise ship to complete the period of extended quarantine put in place by the government of Japan, a government statement said.

Out of the total 138 Indian nationals originally on board the Diamond Princess, 16 Indian crew members have tested positive for coronavirus (COVID-19) and are receiving necessary medical care and treatment at onshore medical facilities in Japan.

They were among the 3,711 people on board the Diamond Princess ship when it docked at the Yokohama port, near Tokyo, on February 3. The ship was quarantined after a passenger who disembarked last month in Hong Kong was found to be the carrier of the disease.

An Indian Air Force aircraft on Thursday evacuated 76 Indians and 36 foreign nationals from the Chinese city of Wuhan, which has been the epicentre of the coronavirus outbreak.

The C-17 Globemaster III transport aircraft was sent to Wuhan on Wednesday and it carried 15 tonnes of medical supplies for people affected by the coronavirus.

On its return, the aircraft brought back 112 people including 23 citizens from Bangladesh, six from China, two each from Myanmar and the Maldives and one each from South Africa, the US and Madagascar.

Earlier, India had evacuated around 650 Indians from Wuhan in two Air India flights. "In all 723 Indian nationals and 43 foreign nationals have been evacuated from Wuhan, China, in these three flights," the Ministry of External Affairs (MEA) said.

On the medical supplies delivered by India to China, the MEA said they will help augment the country's efforts to control the coronavirus outbreak, which has been declared as a public health emergency by the World Health Organisation.

"The assistance is also a mark of friendship and solidarity from the people of India towards the people of China as the two countries also celebrate 70th anniversary of establishment of diplomatic relations this year," it said.

A special Air India flight arrived in New Delhi from Tokyo, on 27 February 2020 bringing back 119 Indian nationals (113 crew members and 6 passengers) who were on-board the Diamond Princess Cruise ship docked off at Yokohama in Japan. In line with India’s neighbourhood first policy and Indo-Pacific vision, the special flight also evacuated 5 foreign nationals—2 Sri Lankans, 1 Nepalese, 1 South African and 1 Peruvian. All the evacuees will undergo a14 day quarantine at the quarantine facility set up by the Indian Army in Manesar, Haryana.

Indian crew members didn't board the special flight and conveyed their wish to continue their stay on-board the Cruise ship to complete the period of extended quarantine put in place by the Government of Japan.

Out of the total 138 Indian nationals originally on-board the Diamond Princess, 16 Indian crew members have tested positive for Coronavirus-2019 (COVID-19) and are receiving necessary medical care and treatment at onshore medical facilities in Japan. Embassy of India in Tokyo has established contact with these individuals and is continuously following-up on their recovery.

The evacuees will be monitored for duration of two weeks by a qualified team of doctors and staff members, to watch for any signs of infection. If any individual is suspected to be infected, he/she will be shifted to the isolation ward at Base Hospital Delhi Cantonment (BHDC).

Daily medical examination of all personnel will be done at the medical facility area. After 14 days, persons with no symptoms will be allowed to go home with their detailed documentation sent to the District/ State surveillance units for further surveillance. Those found infected will be shifted to Safdarjung hospital isolation ward for further medical exams and recovery. Samples will be sent to Department of Virology AIIMS and confirmation will be done by NCDC. Patients will be discharged only after clinical recovery and two successive negative samples tested for n-COV. Apart from playing games, watching TV and having meals together within a barrack, no one will be allowed to interact with the members of another barrack and definitely not another sector.

Italy Blocks Vaccine Shipment For Australia By Agencies 20 minutes ago