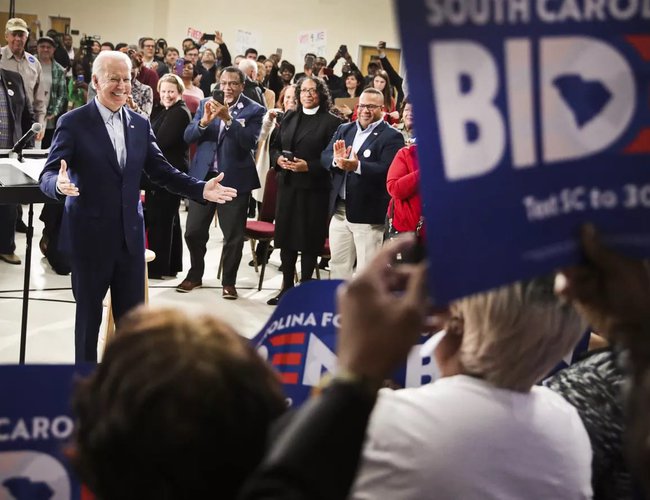 With 93 percent of the precincts having reported results, Biden, the former vice president, gained 49 percent of the votes as of press time, trailed by Vermont Senator Bernie Sanders, with 19.8 percent.

"This campaign is taking off," Biden told a cheering crowd as he declared victory.

Having finished previous nominating contests in three states disappointingly, Biden is counting on a projected win in South Carolina, where he has an appeal especially for African American voters, to shore up momentum.

"We need you, we want you, there's a place for you in this campaign," Biden said. "If Democrats nominate me, I believe we can beat Donald Trump."

After winning 28 delegates in South Carolina as of press time, Biden's delegate total now amounts to 43, second only to Sanders' 52 among all Democrats remaining in the race. The delegate votes in caucuses and primaries resemble the electoral college in the general election.

Sanders, who lost by a slight margin to former South Bend, Indiana mayor Pete Buttigieg in the Iowa caucuses but won the back-to-back races in New Hampshire and Nevada, conceded defeat in South Carolina, stressing no one will win all the states while congratulating Biden on his victory.

"We did not win in South Carolina. That will not be the only defeat. There are a lot of states in this country and nobody can win them all," Sanders said.

"I want to congratulate Joe Biden on his victory tonight," he added. "And now we're on to Super Tuesday in Virginia."

While congratulating Biden on his victory, Warren said in Houston, Texas, "I'll be the first to say that the first four contests haven't gone exactly as I'd hoped."

Elections Is Just A Month Away: Alliance Is Making Is Making By Agencies 1 day, 6 hours ago

US Carries out Airstrikes In Syria By Agencies 1 day, 7 hours ago

A Massive Funeral Held For Woman Shot During Myanmar Protest By Agencies 5 days, 8 hours ago

Australian PM Is Vaccinated As Rollout Begins By Agencies 6 days, 7 hours ago