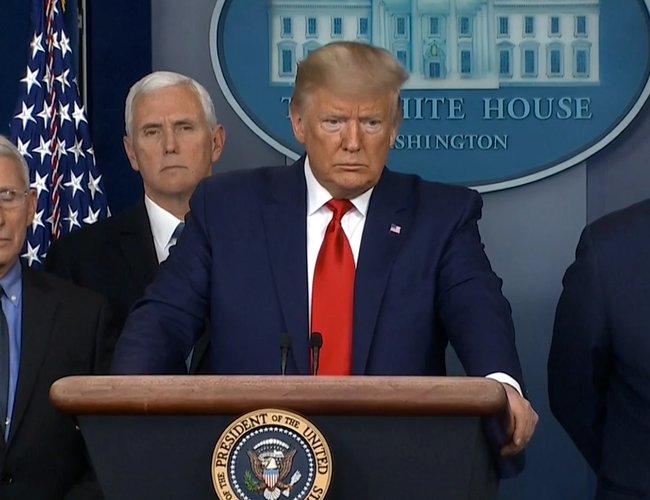 U.S. President Donald Trump outlined his government's plan of action to stop the spread of the coronavirus and urged the country not to panic.

This comes as the first death in the U.S. was confirmed, a man in his late 50s in the Seattle area, one of a number of new cases along the West Coast. The man had underlying health conditions and no history of travel or contact with a known COVID-19 case.

"Our country is prepared for any circumstance. We hope it's not going to be a major circumstance. It'll be a smaller circumstance. But whatever the circumstances, we're prepared," said Trump. "We would respectfully ask the media and politicians and everybody else involved not do anything to incite a panic because there's no reason to panic at all."

Under orders from the coronavirus task force, the State Department is warning U.S. citizens not to travel to specific regions of Italy and South Korea that are most affected by virus. The State Department will work with authorities in those countries to screen anyone coming to the U.S. It will also bar all foreign nationals who visited Iran in the past 14 days. The White House will meet with pharmaceutical companies to discuss a possible vaccine.

The Centers for Disease Control and Prevention is establishing a nationwide testing infrastructure, aiming to have every state capable of testing for the virus by the end of next week. The White House and the National Academy of Sciences have created a committee of experts to help fight the virus.

Congress is getting a spending bill to fight the virus, ready for early next week. They are expected to agree to 6-8 billion U.S. dollars, triple what the White House suggested.

Health officials in California, Oregon and Washington state are worried about the novel coronavirus spreading through West Coast communities because a growing number of people are being infected despite not having visited an area where there was an outbreak, or apparently been in contact with anyone who had.

The U.S. has about 60 confirmed cases. Worldwide, the virus has now hit 61 countries, with 83,000 people sickened, prompting the World Health Organization to raise its risk assessment to its highest level.

The virus continued to spread around the world on Saturday with countries in Europe announcing new cases, Iran revealing another jump in infections, and Qatar becoming the latest Middle Eastern country to report its first case.

South Korea, which is grappling with the largest outbreak of the virus outside China, has urged citizens to stay indoors warning of a 'critical point' in the spread of the infection.

In Europe, Italy has reported more than 1,000 coronavirus cases and 29 deaths, the most in Europe. France said it has 100.

On Friday, the World Health Organization (WHO) warned that the spread of the virus is "getting bigger". More than 85,000 people have been infected worldwide.

Australia has recorded its first death from the coronavirus after a 78-year-old man who had been evacuated from the quarantined Diamond Princess cruise ship died in a Perth hospital.

The man's wife also caught the virus, but is in stable condition, authorities said. Australia has reported 25 cases of coronavirus.

The Korea Centers for Disease Control and Prevention (KCDC) said 376 more cases of coronavirus were reported in the country, most of them in the hardest-hit city of Daegu and the province of Gyeong-buk. No new deaths were reported. The country now has a total of 3,526 cases.

Of the deaths, 34 were in Hubei province, the epicentre of the outbreak. The province also saw 570 of the new cases.

Delta Now Dominant Covid Variant In Most Of Europe: WHO By Agencies 6 hours, 30 minutes ago