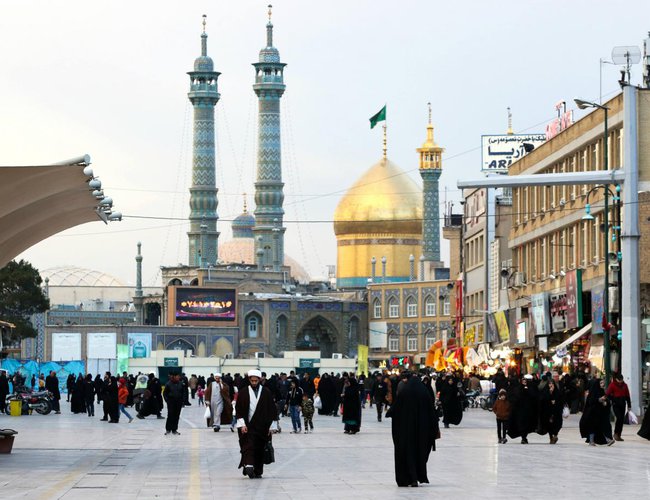 Footage of Shia pilgrims licking shrines in the holy city of Qom in Iran went viral on social media over the weekend, prompting shock and concern from many over the coronavirus epidemic spreading throughout the country.

In one video, the man can be seen licking the gates and surface of a shrine in defiance of the outbreak and the panic it has caused, stating that he will “take in all the coronavirus”.

In another video, a man films himself walking around the main Fatima Masumeh shrine in the city and attacks those who have stopped visiting it, showing himself kissing the walls of the shrine’s entrance while ordering people to “Stop scaring the people this much with coronavirus…Stop toying with people’s beliefs, coronavirus is nothing in the Shia shrines.”

Another video filmed from the country’s other holy city of Mashhad in the far north-east shows a man licking the shrine of Imam Reza while saying “I have come to lick the Imam Reza shrine so that I contract this disease and allow others to visit the shrine with peace of mind.” He was reportedly later arrested, according to the country’s Fars News Agency. https://videos.files.wordpress.com/xg58VrOz/200302_trn_iranians-licking-shrines_cbm_v01_hd.mp4

The incidences of pilgrims and visitors licking the shrines to defy the virus come shortly after the representative of Iranian Supreme Leader Ayatollah Ali Khamenei in Qom, cleric Mohammad Saeedi, stated: “We consider this holy shrine to be a place of healing. That means people should come here to heal from spiritual and physical diseases.”

Qom, home to several shrines of Shia imams and historical figures, is a religious city visited primarily by Shia Muslims from around the region and the world. It has also been at the centre of the outbreak of the virus within Iran, with the government refusing to close down the religious sites despite calls and speculation by many that it should do so until the epidemic subsides.

Yesterday, Iran’s Health Ministry confirmed that the number of people infected within the Islamic Republic has reached 978, with the number of those who have died rising to 54. The country has, however, been suspected and accused of concealing the true number of those infected and dead, with some reporting over 10,000 infections and at least 210 deaths.

US Carries out Airstrikes In Syria By Agencies 1 day, 13 hours ago

A Massive Funeral Held For Woman Shot During Myanmar Protest By Agencies 5 days, 14 hours ago

Australian PM Is Vaccinated As Rollout Begins By Agencies 6 days, 13 hours ago