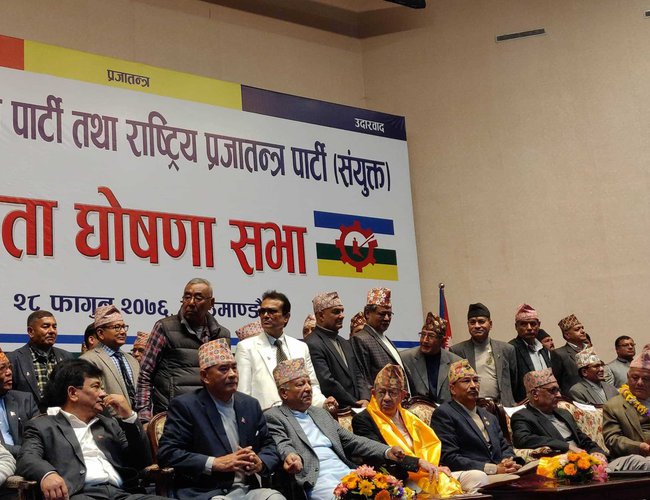 Chairman of Rashtriya Prajatantra (RPP) Kamal Thapa has assured party workers that he will never allow to split the party again. Addressing the unification meeting, Co-chair Thapa said the workers should need to go to the village carrying this message of unity.

Another co-chair Dr. Prakash Chandra Lohani said that RPP will now play the role of the opposition party and he expressed his own commitment to take the party at the grass-root level with a message of unity.

Another co-chair Pashupati Sumsher Rana said that the party will not split again and this unity is possible due to the pressure of the workers. “Unity is the way to strengthen the party and it will revive us.”

Party and Rashtriya Prajatantra Party (United) have finally signed their unification deal, giving shape to the announcement made by the party early this week.

The three co-chairs of the newly united party, the RPP, as seen at the unification event held in Kathmandu today. Photo: Rajaram Bartaula/RPP 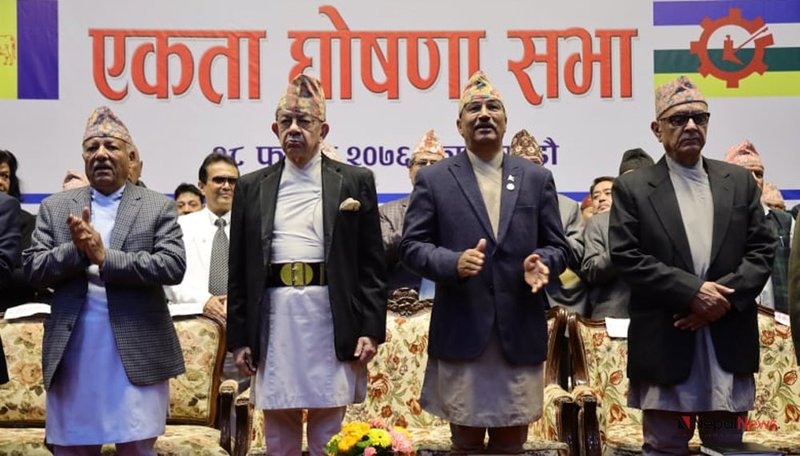 Chairperson of RPP Kamal Thapa and Co-Chairs of RPP (United) Pashupati Shumsher Rana and Prakash Chandra Lohani signed a unification deal at an event held in Kathmandu today. The two parties finally came to an agreement to form a single party after long discussion and dialogue.

The leaders pledged to stabilize the unity of the newly united party during their respective speeches.

Accordingly, the new party will have three presidents. The three presidents will decide on the central committee composition, division of responsibilities and day-to-day affairs of the party.

The unified party will adopt the principle of democracy with the monarchy and the Sanatan Hindu State. It shall follow local self-governance, liberal economy, and non-aligned foreign policy. An interim statute will be developed accordingly. The statute will be drafted and presented by a committee within the next six months. As per the agreement, the general convention of the unified party will be held within the next 18 months. The election symbol of both parties has been withheld for six months.

RPP flag will be used by the new party as well. A task force has been formed to determine further procedures of the unification. Bikram Pandey, Thakur Sharma and Shyam Timalsena from RPP (United) and Dipak Bohara, Buddhiman Tamang and Bhaskar Bhadra of RPP are members of the taskforce.

338 Households Displaced In Fungling Due To Fire By Agencies 6 hours, 13 minutes ago

Chanda Led Maoist And The Government To Hold Talks By NEW SPOTLIGHT ONLINE 16 hours, 39 minutes ago

Nepal Is Committed To End All Kinds Of Discrimination: Foreign Minister Gyawali By Agencies 6 days, 16 hours ago