The Government of Nepal has set a national target of covering basic water supply to 99 percent of households by 2030. The constitution of Nepal 2015 also recognizes access to clean drinking water as a fundamental right of the citizens. With this mission, many water supply projects have been constructed and several others are under construction. For instance, more than 80 small-town water supply projects are being built in over 80 municipalities in the country.

An evident consequence is an increase in cases of protests that water supply projects have faced from upstream communities. In such cases, a commonly seen practice is that the downstream communities make financial contributions to the development of upstream communities. Such compensation mechanisms, although often made in informal and fragmented ways, have helped to avoid the reluctances of upstream users and provide water access to downstream users. However, the responsibilities for the long-term management of water sources remain poorly attended. One of the municipalities which have been making significant contributions for water is Dhulikhel of Kavre district. Dhulikhel municipality aims for the “one house one-tap” by 2022, considering it a major indicator of their development. To achieve this set target, one of the municipal efforts is to strengthen their relationship with Bhumidanda (upstream village) from where they have been tapping water for the last 25 years. 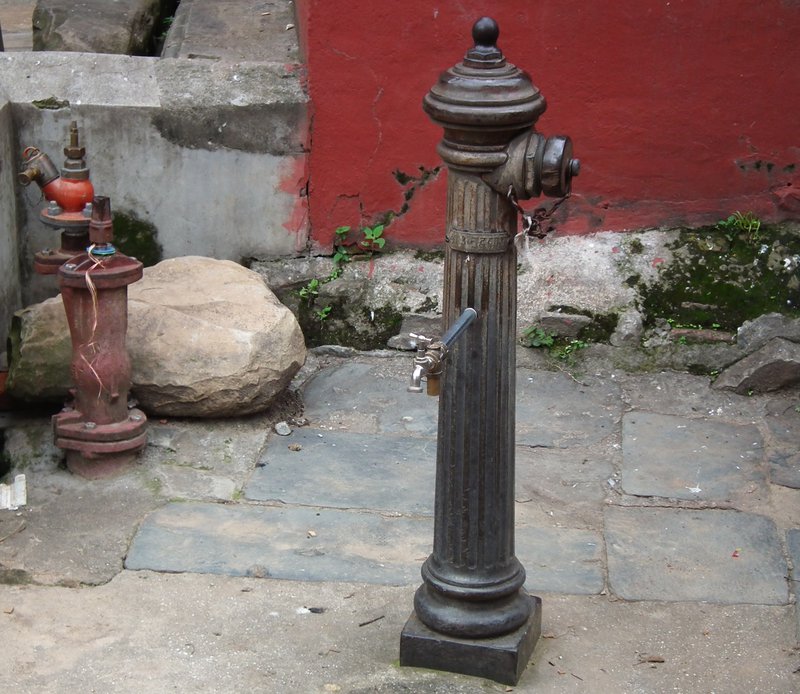 Historically a water-scarce municipality, the first tap water supply in Dhulikhel started through Judha Dhara (1932-1945). Water management and overall development of Dhulikhel Municipality took a new turn with the starting of the Dhulikhel Water Supply Project bringing water from Bhumidanda in 1985. Supported by GTZ, this water supply project depends on Khar Khola, a stream located 14 km far in Bhumidanda Village, which was merged into Panauti Municipality in 2017.

Implementation of Dhulikhel Water Supply Project was possible after a formal agreement between Dhulikhel and Bhumidanda authorities in 1983 for supplying water to Dhulikhel and the management of water sources at the upstream. In return, Dhulikhel Municipality contributed to the construction of a school building, bridge, and provided health and educational facilities for the upstream inhabitants. The agreement was revisited and revised in the early 2010s, increasing the share of water supply for Dhulikhel and increasing its contributions to social and infrastructure development and conservation of the water source in upstream. Over the past years, Dhulikhel has made regular contributions (till now equivalent to 10 million rupees) for the socio-economic development of Bhumidanda as a strategic approach to sustaining its water supply system. Dhulikhel Water Supply Project has set itself as an example of a well-functioning successful drinking water supply system managed by the community. But, less known are the tensions between the upstream and downstream water users around rights and responsibilities for water and the challenges of addressing these and sustaining the water supply system. 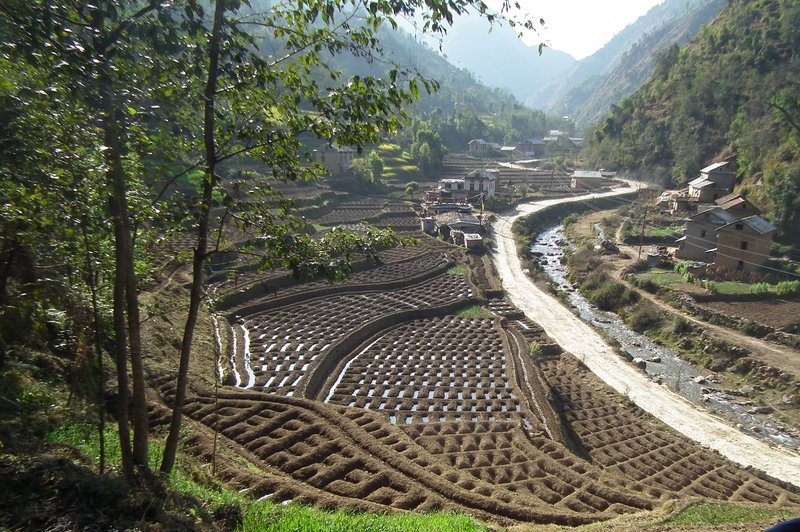 Here, we referred to the case of Dhulikhel as an example of upstream-downstream inter-linkages for water management. Similar cases of increasing dependency of downstream urban areas on upstream rural villages and contestations demanding contributions for conserving the water source area and socio-economic development of prior water users are massively increasing in other parts of the country. A well-known example is the long-awaited Melamchi Water Supply Project which faced several disruptions and subsequent negotiations in addressing the demands of inhabitants in the source area. Some other municipalities struggling with similar issues are Dolakha, Dhankuta, Baglung, and Bhaktapur. Undoubtedly, water-related inter-dependencies and tensions are contextual and cannot be generalized. Yet, a brief analysis of the case of Dhulikhel can help to draw innovative ideas in dealing with such issues. 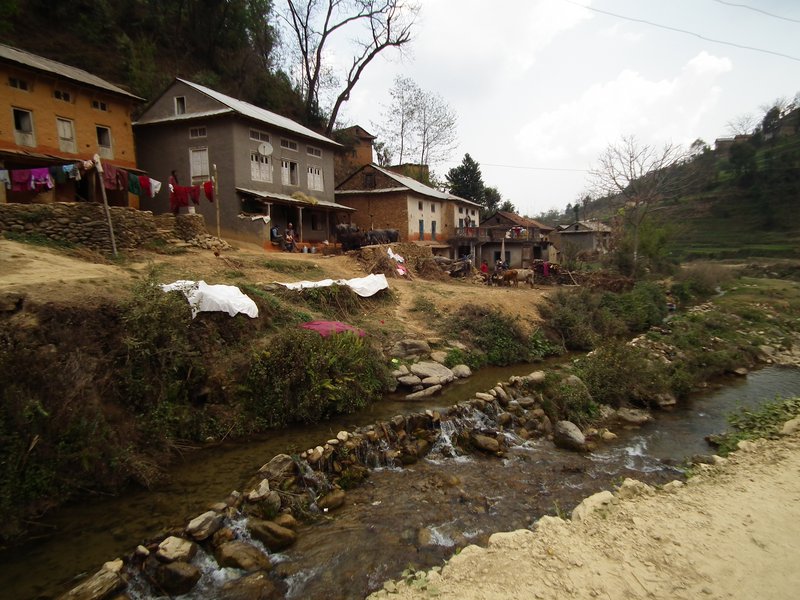 Water from Roshi river being used for daily household activities and irrigation in Bhumidanda (Photo: by Kaustuv Raj Neupane)

Reflecting on the trajectory of Dhulikhel Water Supply System, with increasing water demands and extension of water supply areas, Dhulikhel Municipality has added the flow of springlets originating in its forests and installed two deep bore wells for augmenting the supply of this project. Nonetheless, Khar Khola remains the major source of water supply in Dhulikhel. Besides, Kavre Valley Integrated Water Supply Project (KVIWSP), under-construction for supplying water to extended Dhulikhel and the neighboring Banepa and Panauti municipalities, also depends on an upstream stream water source in the same watershed. While the use of and dependency on the upstream water sources are growing, these sources are declining with declining rainfall, poor conservation of water sources and increasing stone mining in the watershed. This is a major concern of Dhulikhel which has reservations about the conservation of the water source despite the municipality making a continuous financial contribution to achieving this. Upstream inhabitants, being predominantly rural settlement, are concerned about accelerating their development and opine that they have the right to utilize their “resource-based revenue” as per their priorities and preferences. Aiming to benefit the prior-water users in the upstream community, Dhulikhel municipality has made financial contributions for the improvement of watermills and supported drinking water supply and irrigation projects. Yet, understanding to what extent those depending on water-based livelihood in upstream areas are actually benefited from this mechanism needs more research. More recently, upstream inhabitants are also concerned about the potential adverse impacts of stone quarries around their water sources and water-based livelihoods. Conservation of these upstream water sources and reinforcing good relations between upstream water-rich villages and downstream urban centers remain crucial, not only for sustaining these water supply systems but also for the equitable development of both.

In a bid to foster these relations and contribute to the watershed management planning and equitable sharing of water to the user in both the streams, the Southasia Institute of Advanced Studies (SIAS) has continued research and engagement activities, a part of which is the discussion on Pani Chautari. The sixth series of Pani Chautari, coordinated by Dhulikhel Municipality and supported by Climate and Development Knowledge Network (CDKN), brought diverse water user groups both from up and downstream and Municipal authorities from Dhulikhel, Panauti, and Banepa as well as representatives from the private sector, KVIWSP, into a common platform for discussion on these existing practices, concerns, and exploration on ways forward. Discussion during the Pani Chautari showed that an important realization among the water users as well as authorities of both upstream and downstream that revenue or royalty is not sufficient, neither to sustain water supply for downstream water users nor the socio-economic development and watershed conservation. 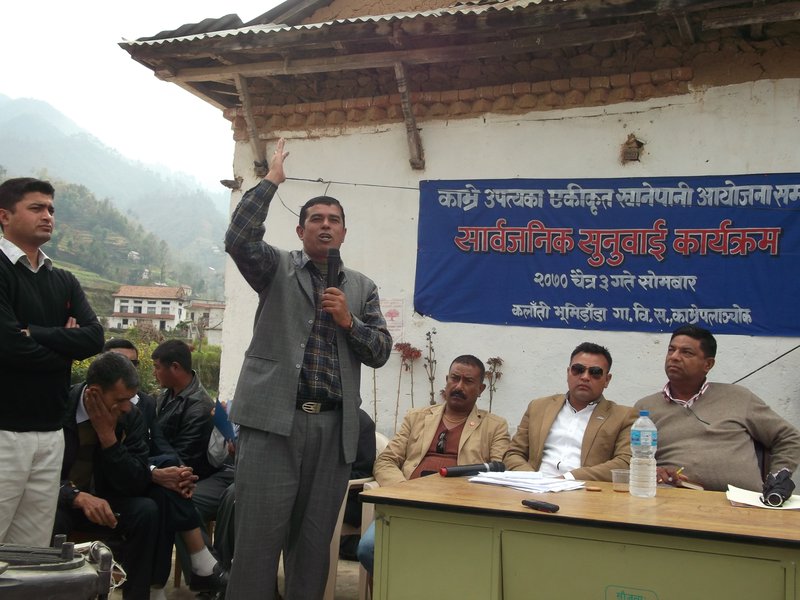 A local leader addressing the public hearing on the upstream and downstream water issue in Bhumidanda (Photo: by Kamal Devkota)

An institutional approach to addressing these water governance challenges can be to form a Water Council, as proposed by Mayor of Dhulikhel, who is also the Board Chair of KVIWSP. While the Water Council can be an effective governance mechanism for dealing water-related concerns of both upstream and downstream water users and reviving and conserving water sources, as envisioned by the Mayor, careful consideration is needed that such an entity is formally authorized as well as institutionally and technically capable and socially inclusive.

Over three decades of experiences and strategies of Dhulikhel - Bhumidanda provides important lessons for Dhulikhel as well as other municipalities struggling with similar upstream-downstream and rural-urban water management issues. While water resources can be an important source of revenue for development, the experiences from Dhulikhel show that strong negotiation skills and socio-political dedication are needed to prevent such a resource sharing to turn into a resource grab as well for materializing rights and equitable access to the resource and related-benefits. Similarly, important insights relevant to the downstream or urban water users can be drawn.

Providing revenue only is not enough to ensure the conservation of water sources and sustainability of the urban water supply system. Exploring alternative water sources, reviving and conserving traditional local water sources, promoting rainwater harvesting and recharge and creating incentives for innovative water management can help in reducing dependency on external water sources and shift towards a sustainable water management practice. Given the growth in the ‘urban’ areas in the country and growing urban-oriented development interests and activities, water needs and demands for improved water supply services will drastically grow. Appreciation and internalization of the inter-dependencies of different local government units in managing water and overall mutual development become more crucial in the current context as local governments have both, more rights over local resources and more responsibilities for local development.

*Authors are researchers at the Southasia Institute of Advanced Studies (SIAS).

Authors are researchers at Southasia Institute of Advanced Studies (SIAS).

Never The Twain Shall Meet By Hemang Dixit 13 hours, 56 minutes ago