China Announces Peak Of Corona Epidemic Over In China

China Announces Peak Of Corona Epidemic Over In China 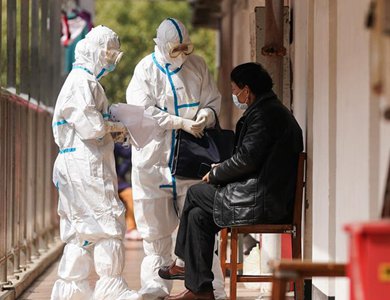 The National Health Commission (NHC) announced on Thursday that peak of the COVID-19 epidemic in China has passed, with numerous improving signals including the fact that the number of new cases in Wuhan, Central China's Hubei Province, declined to single digits for the first time.

The tally of daily new confirmed cases in epidemic-stricken Wuhan declined to eight on Wednesday while in the other places in Hubei Province, no new cases had been reported in the past week as of the same day, Mi Feng, spokesperson of the NHC, said at a press conference on Thursday in Beijing.

Meanwhile, seven new cases were reported outside Hubei among which six were imported cases, Mi said, noting that these facts indicated that the peak of the COVID-19 epidemic in China has passed.

She said there are two vital criteria to judge whether the epidemic really ends: first, no new cases for a continuous 28 days; second, all infected cases have been hospitalized.

Some provinces and regions like the Macao Special Administrative Region and Northwest China's Xinjiang Uygur Autonomous Region have also released plans to reopen local schools, which have been closed for more than one month due to the epidemic.

However, experts called for patience and attention to imported cases given the rapid spread of the virus outside China.

As of Thursday, more than 43,000 COVID-19 cases had been reported outside China from nearly 120 countries and regions, media reported.

"It needs a scientific strategy," said Yang Zhanqiu, a Wuhan-based virologist, saying local governments should carefully and gradually make moves to resume work and life. However, it is better to be patient in terms of Wuhan.

Zhong Nanshan, China's leading expert on respiratory diseases, said Thursday that the global COVID-19 infection, which was declared a pandemic by the World Health Organization on Wednesday, may come to an end by June, which depends on each involved country's tough efforts.

Weather Update And Analysis For March 3 Across Nepal By NEW SPOTLIGHT ONLINE 10 hours, 25 minutes ago