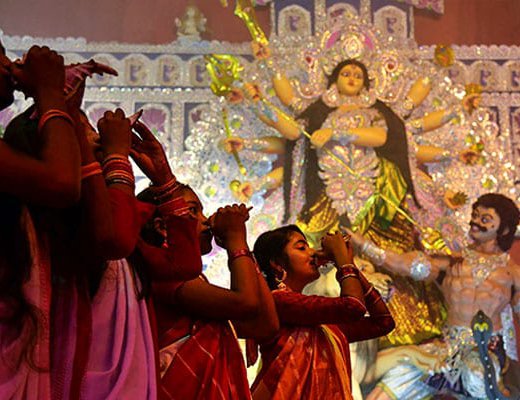 Navaratri is a nine nights (and ten days) Hindu festival that is celebrated every year. Navaratri is an amalgamation of two words, where Nav means Nine and Ratri means Nights so it is nine nights of celebration. Theoretically, there are four seasonal Navaratri that fall every year. However, only two of them - Chaitra Navratri and Sharad Navratri - are celebrated with fervour. The other two are 'Gupt Navratri'.

The post-monsoon autumn festival called Sharada Navaratri, it is observed in the honour of the divine feminine Devi (Durga), celebrated in the month Ashvin, typically falls in the Gregorian months of September and October.

According to the Gregorian calendar, Chaitra Navratri typically falls around March or April. Chaitra is the last month of Hindu lunar calendar and because of it, this Navratri is known as Chaitra Navratri.

All nine days during Navratri are dedicated to nine forms of Goddess Shakti. Most customs and rituals which are followed during Shardiya Navratri, are also followed during Chaitra Navratri.

Chaitra Navratri falls in the Hindu month of Chaitra. From observing fasts to worshipping nine forms of the Goddess, Hindus around the world celebrate the festival.

Kumar Shasti And Sithi Nakha 2021: The Birthday Of Kumar And The Day To Clean Up Water Sources By Agencies 1 week ago

Buddha Purnima 2021: Celebration of Buddha Jayanti By Agencies 4 weeks ago