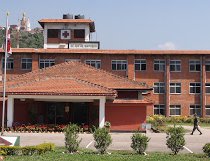 At a time when all civilian authorizes are in confusion where to build isolated hospital, Nepali Army Headquarters has readied a 100-bed isolation ward, including 30 ICU high care beds at Birendra Military Hospital, Chhauni, in Kathmandu.

According to The Rising Nepal, the facilities will be used for treating suspected coronavirus patients and those found positive. The infrastructure were set up inside the premises of the hospital after the government formed the Coronavirus Crisis Management Centre (CCMC), a task force formed to implement the policy level decisions taken by high level committee for the prevention and control of coronavirus headed by Deputy Prime Minister and Minister for Defence Ishwar Pokharel.

The newly constructed infrastructure is 100-beded isolation ward, including 30 ICU beds with high care service for those patients who test positive for the virus, according to Brigadier General and spokesperson of NA, Bigyan Dev Pandey.

The Rising Nepal says remaining 70 beds of general out-patient department (GOPD) prepared solely by investing the budget of the welfare fund of NA will be for treating the patients to be kept in isolation wards. To bring the GOPD into full-fledge operation, the NA still requires the support of the government for arranging medical equipment and other kits in the isolation beds, said Pandey. In the 30-bed ICU high care unit, two sub-units will be formed categorising them into 15-bed in one unit, said Colonel Dr Shrijan Malla.

The NA has also prepared to design separate ICU at one separate block of the hospital for treating patients testing positive for the virus. For arranging ICU related equipment and health services, the government had provided Rs 100 million and Rs 70 million was added up by the NA itself to buy ICU related equipment.

Weather Forecast And Analysis For June 12 Across Nepal By NEW SPOTLIGHT ONLINE 22 hours, 34 minutes ago