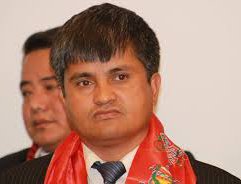 Prime Minister KP Sharma Oli's press adviser Surya Thapa has expressed concern over a press statement issued by the Federation of Nepali Journalists ( FNJ) connecting his name in regard to the forced removal of the news content from the kathmandupress.com, an online news portal reports Rastriya Samachar Samiti (RSS),

According to RSS, Thapa said his serious attention has been drawn to the statement issued by FNJ General Secretary Ramesh Bista on Thursday, terming it totally baseless and erroneous. It was just a propaganda aimed to defame the Prime Minister's Secretariat and its secretaries when a tender called by the Ministry of Health and Population to purchase health equipments and kits had been already terminated.

''It is not true that the Prime Minister's political adviser and press adviser exerted pressure to remove the news content, and the accusation is ridiculous and irresponsible.'' It may be noted that the kathmandupress earlier reported it was asked to remove the news about alleged irregularities involved in the procurement process of medical equipments supplied from China and when it refused to do so, the news was removed through hacking.

PM Oli Stresses The Need To End Gender Based Violence By Agencies 8 hours, 12 minutes ago

PM Oli Adopted A Rhino By Agencies 4 days, 13 hours ago