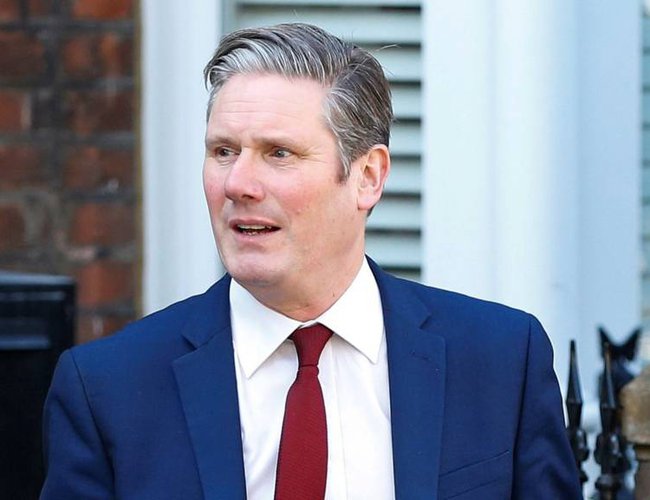 The Labour Party announced on Saturday that Starmer will take over from Jeremy Corbyn, who will step down to take responsibility for the party's crushing defeat in December's general election.

Fifty-seven-year-old Starmer worked as a barrister specializing in human rights issues before being elected to the House of Commons in 2015. He served as Shadow Secretary of State for Exiting the European Union.

In a video message, Starmer expressed his resolve to lead the Labour Party "into a new era with confidence and hope."

Amid the rapid spread of the coronavirus in Britain, Starmer says that under his leadership, his party will "engage constructively with the government, not opposition for opposition's sake."

Prime Minister Boris Johnson wrote on Twitter that he spoke to Starmer and that they "agreed on the importance of all party leaders continuing to work constructively together through this national emergency."

Starmer is expected to face the challenge of rebuilding the Labour Party after its historic election defeat, while boosting its presence as the largest opposition party as the virus continues to spread across the country.

Total confirmed COVID-19 cases around the world have topped 1,192,028 as of Sunday with the U.S. reporting over 300,000 cases, according to the Center for Systems Science and Engineering (CSSE) at Johns Hopkins University.

The U.S. reported 308,533 confirmed cases with 8,376 deaths by 7:40 p.m. local time Saturday,according to the CSSE. The state of New York, the country's hardest-hit area, recorded over 113,000 cases and more than 3,500 fatalities. Other states with over 10,000 cases include New Jersey, Michigan, California, Louisiana, Florida, Massachusetts and Pennsylvania.

Italy reported 681 deaths, bringing the total to 15,632 since the outbreak of the new coronavirus epidemic in northern Italy on February 21. It was the lowest daily rise in deaths since March 23.

In France, the death toll jumped by 441 in 24 hours to 7,560, the country's top health official Jerome Salomon announced on Saturday. Of these, 5,532 died in hospitals while 2,028 died in nursing homes.