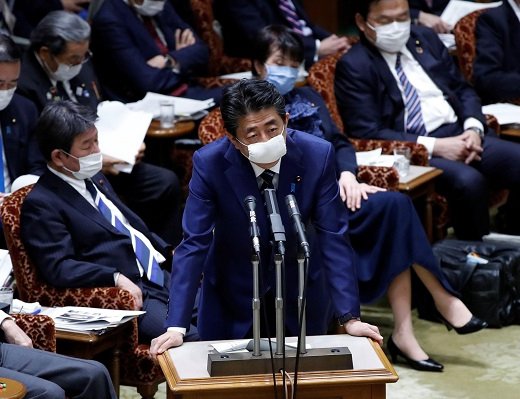 Japan's Prime Minister Abe Shinzo is explaining his decision to declare a state of emergency to members of the Lower and Upper chambers of the Diet.

The coronavirus outbreak has pushed the government to issue fresh measures for Tokyo and six other prefectures.

They come as the capital and other major Japanese cities have seen a rapid spread of the coronavirus and an increase in the number of cases with untraceable infection routes.

Earlier on Tuesday morning, an advisory panel of experts gave the green light to Abe to declare a state of emergency.

Abe said, " The government has learned the rapid nationwide spread of the virus is likely to have a huge negative impact on people's livelihoods and the nation's economy./ I have decided to declare a state of emergency."

Fears are rising that the country's healthcare system could be overwhelmed.

The declaration will cover the following prefectures. Tokyo, Kanagawa, Saitama, Chiba, Osaka, Hyogo and Fukuoka. It is expected to be in place for about a month.

Abe will hold a news conference Tuesday evening to explain how people's lives will change and why the country needs stricter measures.

Koike said, "I would like to end this fight in the shortest possible time. I'm asking for cooperation from all citizens."

Governors in designated areas will be able to enact various independent measures on their own.

Over 10 Reportedly Killed In Myanmar Protests By NEW SPOTLIGHT ONLINE 1 day, 10 hours ago

Elections Is Just A Month Away: Alliance Is Making Is Making By Agencies 4 days, 9 hours ago

US Carries out Airstrikes In Syria By Agencies 4 days, 9 hours ago