Taiwan Claimed It Informs WHO Over Possible Pandemic In December

Taiwan Claimed It Informs WHO Over Possible Pandemic In December 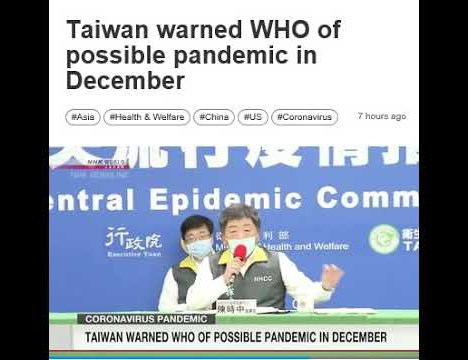 Taiwanese authorities have disclosed a document sent to the World Health Organization in December in which they warned of a suspected human-to-human virus transmission occurring in China.

The disclosure came after the US State Department on Friday said that it is "deeply disturbed that Taiwan's information was withheld from the global health community". It also criticized the WHO for "choosing politics over public health".

The AFP news agency quoted the WHO as saying the message it received from Taiwan made no mention of human-to-human transmission.

The Taiwanese authorities in response disclosed the full message on Saturday.

The message read, "News sources indicate at least seven atypical pneumonia cases were reported in Wuhan, China". It also said while China's health authorities replied to the media that the cases were believed not to be SARS, "they have been isolated for treatment".

Taiwan's Health Minister Chen Shih-chung said any medical professional would know the circumstances requiring isolation, and questioned whether being treated in isolation was not a warning.

The United States has accused the World Health Organization of being "China-centric". Taiwan's assertion is in line with the United States' view on the issue.