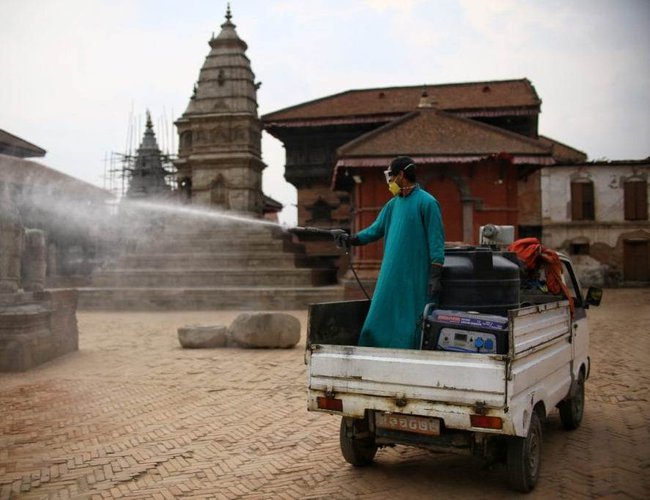 For the first time in a century, Bhaktapur celebrated Bisket Jatra without any fanfare or festival. Although the Jatra is canceled this year, families celebrated the festival confining to their home.

Unlike in the past, the old city looks deserted with municipal officials busy in spraying disinfecting the nook and corner. Only a handful of people were walking.

Amid the fear of global pandemic COVID-19, the New Year festival was canceled As there has been a nationwide lockdown in place, people are compelled to celebrate it within the family.

Bisket Jatra, Bhaktapur's weeklong festival marks the ancient solar Nava Barsha (New Year) and is the only festival that does not follow the lunar-based Nepali calendar. The Jatra commences after a special Tantric ritual in the Bhairab temple in Taumadhi Tole in Bhaktapur.

Devotees and participants during the Bisket Jatra at Taumadhi Tole in Bhaktapur, Kathmandu Valley, Nepal.

Bhairav and Bhadrakali are then placed in large chariots (locally known as Rathas) and pulled through crowds of cheering onlookers. During the festival, people replay a drama passed on over the centuries.

The chariots, pause for a tug of war between the eastern and western sides of town and then move down a steep road leading to a river, where a 25-m high lingam (vertical pole) is erected. In the evening the following day, the pole is pulled down, again in a tug of war and as the pole crashes as the official new year commences.

Bisket Jatra is also celebrated in Thimi and Balakhu with Jibro Chhedne Jatra and Sindoor Jatra respectively. The festivities conclude with several days of spiritual entrancement, dancing, and merry-making.

For senior citizens, the silence in the streets during the New Year Jatra times was their first such experience in their lifetime. They had been celebrating this tradition since their childhood but this year they were confined to their homes.

In Madhyapur, the festival starts from the New Year’s Eve of Nepali calendar Chaitra 30, and the most popular Jatra is celebrated on the second day of the New Year popularly known as Sindoor Jatra in which the people use vermillion powder and gather from various parts of Madhyapur Thimi, carrying their own chariots at Layeku Thimi.

Most of the locals in the area participate in the jatra where locally brewed rice beer and alcohol are taken in the name of the gods, while women are seen in the temples and busy preparing Newari feast (a traditional party within family members).

Bisket Jatra is an annual event celebrated with much devotion and vigor in different parts of Nepal, especially in Bhaktapur, Timi, and Bode. Of all the different place of celebration, Bhaktapur witness the major group of audience.

On the very first day of Bisket Jatra, Bhairab and Bhadrakali are worshiped in their respective chariots in Bhairab temple in Taumadi Tole in Bhaktapur amid various special tantric rituals.

The same evening both chariots are pulled by hundreds of people as a tug of war between the upper and lower part of Taumadi Square.

They try to pull the chariot to their direction because the first day is Deo Kwayo Bijaayegu meaning “God comes down to the mass of people from his own sacred home.” But as per the ritual, chariots are pulled towards west from Taumadi Square.

Then, on the second day, locals visit the chariot and offer their prayers, while a particular group take care of chariots and performs various rituals.

The third day of Bisket Jatra follows the same as on the second day. People also offer their prayer and worship the God and Goddess, whose chariot was pulled on the first day.

The fourth day is the last day of the year (Nepali New year) when the major event of Bisket Jatra takes place.

Two lingos (poles) are erected in two different areas of Bhaktapur; one in the Pottery square around noon and another with two extended arms (representing snakes) in Bhelu Khel in the evening.

Thousands of people gather around to witness this unique celebration. The pole in Bhelu Khel is crashed down symbolizing the killing of the snake after the 24 hours of its erection. However, the pole in Pottery Square is kept for another five days.

On the fifth day, people gather around Bhelu Khel and Pottery Square to worship the deities while sacrificing animals like goats and cocks.

Along with Bhairab and Bhadrakali, other deities like Mahakali, Mahalaxmi, Barahi, and Ganesh are worshipped.

The sixth day of Bisket Jatra is celebrated as Sindur (vermilion) Jatra in Thimi. People throw vermilion power over each other in the joy of welcoming New Year and spring.

Tongue Piercing event is also observed in this day in Bode. A male volunteer gets his tongue pierced in a spiritual trance with an iron spike and walks around the town with a round bamboo rack with flaming torches in the shoulder. This event takes place during the chariot demonstration.

Kha Lawayaakeu Jatra meaning “God and Goddess from two opponents getting together” is celebrated on the very same day in different locations. Lord Ganesh and Bhairab’s chariot are brought together from two different places in Pottery Square, while people throw vermillion powder to each other marking Sindur Jatra.

Likewise in the eastern part of Dattatreya Temple in Suryamadi tole, the festival is celebrated with small chariots of God Bramayeni and Maheshwari.

On the seventh day of Bisket Jatra, the festival is celebrated worshipping local God and Goddess in different areas. Friends, family, and relatives come together to celebrate the festival and have a special feast too.

Eighth Day is rather a colorful day when people wearing traditional dresses come in the street and visit the whole city in a chariot procession.

They also offer food items like fruits and sweets to local God and Goddess. The whole ambiance gets filled with joy as traditional music and dance starts taking place.

The last day of Bisket Jatra marks the pulling down of lingo (pole) erected five days ago in Pottery Square. The pole is drawn amid the various rituals.

Then, as evening falls on, Deo Tha Bijaayegu meaning “God now returns to his own sacred home” is observed when chariots of Bhairab and Bhadrakali are pulled towards an upward direction.

As the festival of Bisket Jatra is now coming to an end, people come together playing various traditional musical instruments.

Swasthanibrathakatha To Conclude Today By Agencies 4 days, 9 hours ago