PM Modi on India’s Lockdown 2.0: Prime Minister Narendra Modi has announced an extension of the nationwide lockdown till May 3 to tackle the spread of novel coronavirus. 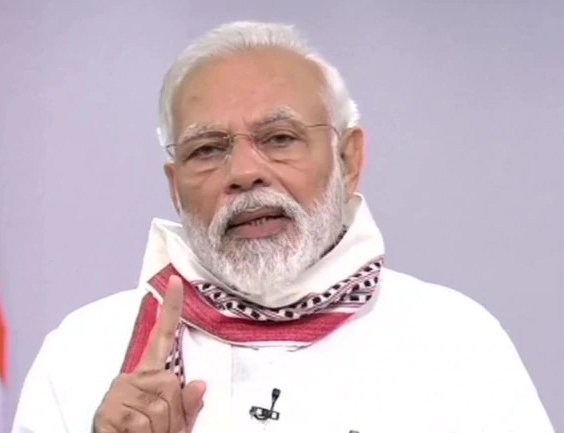 Prime Minister Narendra Modi has announced the extension of a nationwide lockdown till May 3 to contain the spread of Covid-19 as the number of novel coronavirus cases surged past 10,000-mark on Tuesday. Hinting at partial relief, however, the Prime Minister said there could be some relaxations after April 20 in places where there is no hotspot.

PM Modi said the Centre will closely monitor hotspots in states across India and added that those areas where there are no hotspots will get partial relief. “Till April 20, all districts, localities, states will be closely monitored, as to how strictly they are implementing norms. States where hotspots are contained could be allowed to resume some important activities, but with certain conditions,” the PM said.

Detailed guidelines on extension of the coronavirus lockdown will be issued on Wednesday, the PM added.

The Prime Minister, in his address to India on Tuesday, began by lauding the efforts of Indians in the fight against novel coronavirus. “Covid-19 is spreading fast but India’s fight against coronavirus is going strong. It is because of your efforts that we are able to put up a fight,” the PM said as he thanked people for their co-operation.

PM Modi said India received huge benefits from the 21-day lockdown in checking the pandemic and added that the country has dealt with the situation better with limited resources. “People have gone through hardships to save India. I know how many difficulties you faced. I respectfully bow to the people of India for their sacrifice,” PM Modi said.

The national lockdown first came into force from March 25 when the PM took an unprecedented measure in the fight against Covid-19. The lockdown was scheduled to end today.

The decision to extend the lockdown followed after a broad consensus emerged that the national lockdown should be extended by at least two weeks following a meeting between PM Modi and state chief ministers on Saturday.

It was reportedly after this meet with the Prime Minister that it was decided that the nationwide lockdown will be extended to tackle the spread of Coivid-19. The extension request from states came despite concerns that the shutdown will put millions out of work.

“PM has taken correct decision to extend lockdown. Today, India’s position is better than many developed countries because we started lockdown early. If it is stopped now, all gains would be lost. To consolidate, it is imp to extend it.”

"If it is stopped now, all gains would be lost. To consolidate, it is imp (important) to extend it," Arvind Kejriwal had written on Twitter after the meeting while he added that PM Modi had "taken (a) correct decision to extend (the) lockdown”.

Several states had, however, pushed for resumption of some economic activities like in the farming sector in areas where no cases of the novel coronavirus have been reported.

All That Has Happened Till Now

Prime Minister Narendra Modi first addressed an anxious nation on March 19 as the coronavirus pandemic emerged as a serious concern for the country. In his televised address, the PM asked the people to observe ‘Janata Curfew’ for March 22.

The Prime Minister urged Indians to remain indoors as much as possible as he suggested ways to battle the coronavirus pandemic.

On March 24, the Prime Minister came back and announced a 21-day lockdown across the country. In his second address, PM Modi said the step was taken as it was the only way to break the chain of infection. The lockdown was to be in effect till April 14.

PM Modi later asked citizens to make noise at 5 pm to show their appreciation for medics, nurses and sanitation workers. This call was well received as Indians came out to clap, clang metal vessels and ring bells to cheer workers battling the spread of the coronavirus.

Ten days into the lockdown, the Prime Minister addressed the nation again and asked people to light candles, lamps and hold mobile phone torches for nine minutes from 9 pm on April 5 to demonstrate a collective will to fight coronavirus.

As of Tuesday morning, the death toll due to coronavirus has climbed to 339 with over 50 deaths within 24 hours. The number of cases in the country, meanwhile, had crossed the 10,000-mark, according to the Union Health Ministry. Over a thousand have been cured and discharged.

Nepal Airlines To Send Its A330 Aircraft To China To Bring Medical Equipment By Agencies 1 day, 7 hours ago

Chinese Anti-epidemic Supplies To Be Sent To Nepal: Spokesperson By Xinhua 1 day, 21 hours ago