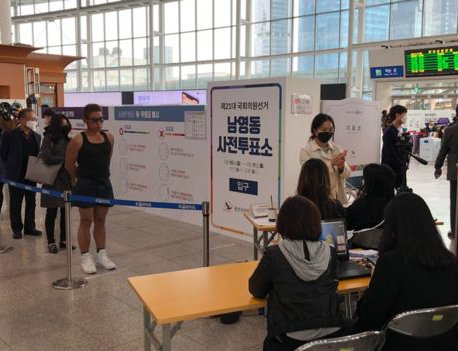 South Korean voters cast ballots on Wednesday in parliamentary elections that are seen as a referendum on President Moon Jae-in amid the country's fight against the new coronavirus.

Voting kicked off at 6 a.m. and was to run until 6 p.m. at 14,330 polling stations across the nation, according to the National Election Commission (NEC). The number of eligible voters is 44 million reports Yonhap news agency.

The country has gone ahead with the elections as its massive and rapid testing and quarantine efforts have slowed the spread of COVID-19.

South Korea saw new daily cases of the virus dip to around 30 recently, bringing the nations' total to 10,564.

As of 9 a.m., some 3.54 million people, or 8 percent of the total voters, completed casting ballots, about 0.9 percentage point higher than the corresponding figure in the previous general elections four years ago.

The turnout tally does not include people who participated in last week's two-day early voting, as well as votes by overseas South Korean nationals and those aboard ships, the NEC said. Those numbers will be included in the turnout starting at 1 p.m.

A higher-than-expected turnout for the advance voting has drawn attention to whether turnout for Wednesday's elections could surpass 60 percent. Voter turnout in the 2016 general elections came in at 58 percent.

The ruling Democratic Party (DP) is widely expected to win the elections as the government's response to the outbreak has gained a positive assessment.

The liberal Moon government and the governing party had suffered falls in their public approval ratings, hit by a prolonged economic slowdown and a political scandal involving former Justice Minister Cho Kuk.

But the government's handling of the COVID-19 crisis has apparently changed public sentiment, illustrated in recent polls in which Moon's approval rating shot up to over 50 percent. The DP is targeting at least 147 seats in the elections. 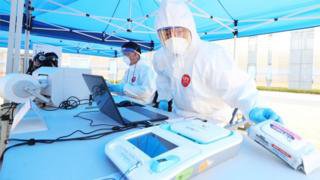 After casting his ballot, former Prime Minister Lee Nak-yon of the ruling party, who is running in the Jongno district in central Seoul, said there is room for improvement in the country's election culture.

"Though I have been subject to negative campaigning, I find it relieving that I myself did not do it," he told reporters. "That is because I believed in voters' judgment."

The main opposition United Future Party (UFP) has called on its conservative supporters and swing voters to support it to keep the ruling party in check.

"I believe people will give us the seats necessary to keep this government in check," UFP Chairman Hwang Kyo-ahn said after casting his vote. He also is competing in Jongno.

The UFP has stressed the need to "judge" the government, citing what it called policy failures to prop up the economy. The party is eyeing at least 125 seats.

The NEC has prioritized bolstering voter safety at polling stations to prevent people from being exposed to the risk of infection.

Voters wearing face masks should have their temperatures checked at the entrance. They should also disinfect their hands with sanitizers and put on plastic gloves before casting ballots.

To keep social distancing rules, voters are advised to stand at least 1 meter apart from others.

Delta Variant As Contagious As Chickenpox, May Cause More Severe Infection: Report By Agencies 3 days, 2 hours ago

England To Lift COVID Restrictions As Cases Rise By Agencies 2 weeks, 1 day ago