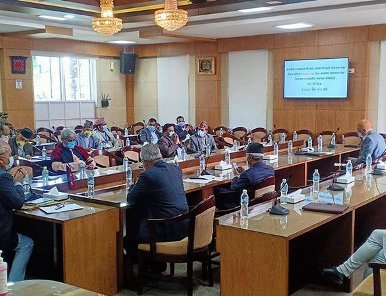 The 19th meeting of the High-level Task Force led by Deputy Prime Minister Ishwar Pokhrel decided to suspend domestic flights until April 30 like all international flights reports The Rising Nepal.

Narayan Prasad Bidari, member of the committee and Secretary at the Office of the Prime Minister and Council of Ministers said the committee also decided to evacuate Nepali nationals who have been working in United Nations organizations in Afghanistan.

He said that the government decided to evacuate the Nepali nationals working in UN organisations in Afghanistan under the request of the UN agency reports the paper.

In the media briefing, he said that the government decided to step up the COVID-19 response measures: test, identify and treat.

He said that 15,800 COVID-19 tests were conducted till Tuesday and said that the government would coordinate with the health workers working in the private sectors to conduct mass testing in the affected and risk zones.

Bidari said the meeting also decided to facilitate the import of the medicines and medical equipment and logistics done by the private sectors. He said the Ministry of Health and Population and concerned bodies would give continuity to import the medical goods under the government to government (G2G) process.

The Ministry of Foreign Affairs has already sent a letter to the Chinese agency responsible for supplying medical goods. The process is likely to complete today itself,” said Bidari.