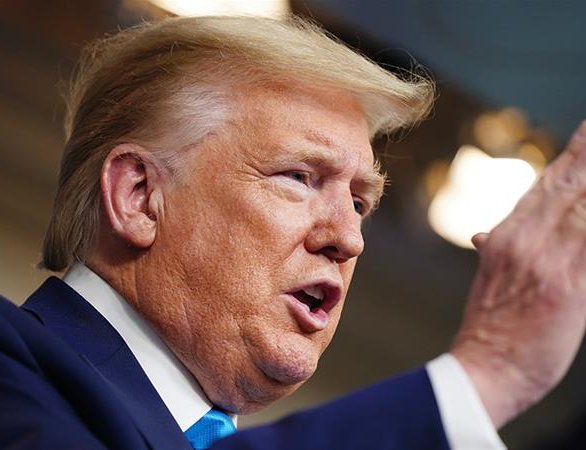 "The president's statements this morning encourage illegal and dangerous acts. He is putting millions of people in danger of contracting COVID-19," Inslee said in a series of tweets on Friday afternoon.

"His unhinged rantings and calls for people to 'liberate' states could also lead to violence. We've seen it before," Inslee added. "The president is fomenting domestic rebellion and spreading lies - even while his own administration says the virus is real, it is deadly and we have a long way to go before restrictions can be lifted."

The president’s statements this morning encourage illegal and dangerous acts. He is putting millions of people in danger of contracting COVID-19.

His unhinged rantings and calls for people to “liberate” states could also lead to violence. We’ve seen it before. 1/7

The president's tweets marked a different tone from the day before, when Trump said it was up to state governors to decide when and how to reopen their economies. The Trump administration on Thursday unveiled a phased approached to the reopening of the economy, saying governors would be calling their "own shots" while the federal government stood "alongside" them.

On Friday, responding to pleas from governors for help from the federal government in ramping up testing for the virus, Trump put the burden back on them: "The States have to step up their TESTING!"

Trump defended his tweets later on Friday, saying he was "very comfortable" with the posts. He accused the three states of doing "too much" and said he was not worried about those protesting against stay-at-home orders, despite the fact demonstrators have defied the Trump administration's social distancing guidelines.

Trump has repeatedly expressed his desire to see businesses reopen quickly and claimed earlier this week that he possesses "total authority" over the matter, even though the lockdowns and other social-distancing measures have been imposed by state and local leaders, not Washington, DC.

Some states did take some of the nation's first, small steps toward loosening restrictions.

In Florida, Republican Governor Ron DeSantis gave the green light for municipalities to reopen beaches and parks if they could do so safely. In Texas, Republican Governor Greg Abbott said stores could begin selling items curbside, non-essential surgery could resume, and state parks could reopen.

A man speaks with a library worker after receiving an unemployment form, as the outbreak of coronavirus disease (COVID-19) continues, in Hialeah, Florida [File: Marco Bello/Reuters]

But governors of both parties Friday suggested they would be cautious in returning to normal, with some of them warning that they can't do it without help from Washington to expand testing.

"The federal government cannot wipe its hands of this and say, 'Oh, the states are responsible for testing,'" New York Governor Cuomo said. "We cannot do it without federal help."

West Virginia Governor Jim Justice, a Republican ally of Trump, said he would listen to medical experts in deciding how to move forward.

"I am not going to do something that I feel in my heart is the wrong thing that's going to endanger our people," he said.

Democratic Virginia Governor Ralph Northam said he and his staff are focused not on the president's tweets but on fighting a "biological war". 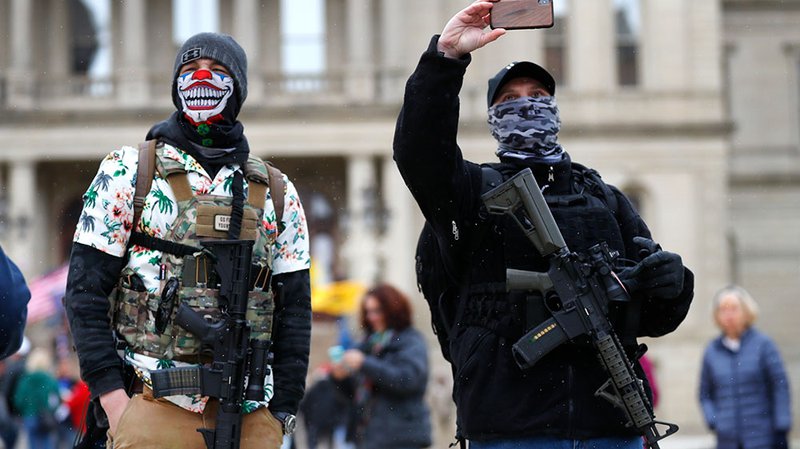 "I do not have time to involve myself in Twitter wars," said Northam, who is a medical doctor. "I will continue to make sure that I do everything that I can to keep Virginians safe and to save lives."

The clash between Trump and Cuomo was personal, with the president complaining the governor has not said thanks for the help he has received from the federal government. Cuomo countered by saying: "I don't know what I'm supposed to do, send a bouquet of flowers? 'Thank you to the federal government for participating in a federal emergency.'"

Even in largely rural states with small populations, such as Wyoming, Maine and South Dakota, governors said they were not anxious to quickly resume business as usual.

"Until we've got the testing up to speed - which has got to be part of the federal government stepping in and helping - we're just not going to be there," said Wyoming Governor Mark Gordon, a Republican.

The University of Washington, whose computer models have frequently been cited by health officials at White House briefings, predicted Friday that Vermont, West Virginia, Montana and Hawaii could open as early as May 4 if they restrict large gatherings, test widely and quarantine the contacts of people who test positive.

Iowa, North and South Dakota, Nebraska, Utah, Arkansas and Oklahoma, however, are among states that would need to wait until mid-June or early July. About half the states should wait until at least early June to reopen, and all should gauge the capacity of their public health systems to handle outbreaks, university researchers said.

Worldwide, the outbreak has infected more than 2.2 million people and killed over 153,000, according to a Johns Hopkins University tally based on figures supplied by government health authorities around the globe, though it has becoming increasingly clear that the true numbers are much higher.

Over 10 Reportedly Killed In Myanmar Protests By NEW SPOTLIGHT ONLINE 6 days, 22 hours ago