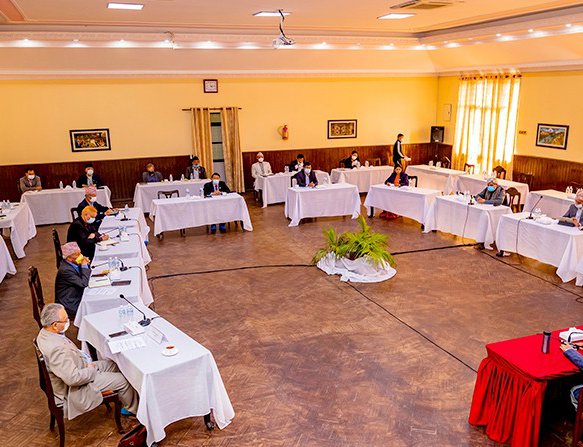 Following extension of lockdown order, hundred of daily wagers and poor people have been walking for hours to reach home, risking their lives.

A division bench of justices Ananda Mohan Bhattarai and Sapana Pradhan Malla issued the order in a writ petition filed by Senior Advocate Prakash Mani Sharma,Dinesh Tripathy and advocates Kamal Koirala and Sanjya Adhikari and others against the Office of the Prime Minister and Council of Ministers and others.

According to The Himalayan Times, the court also told the government to isolate or quarantine the stranded people if they were suspected of having contracted COVID-19. As per the apex court order, local levels will have to collect names and addresses of those returning from urban centers and put them in quarantine.

Prime Minister KP Sharma Oli instructed the local authorities to ensure food for those people who are on way to their villages.

During the meeting, PM Oli inquired about the preventive measures taken by the high-level committee and COCMC to prevent and control the possible outbreak of the virus, arrangement of medicines, medical equipment and goods and health professionals reports The Rising Nepal.

PM Oli also instructed the concerned authorities to enforce lockdown stringently and restrict the attempts of a few people to travel to their villages report the daily.

During a special meeting called by PM Oli at his official residence in Baluwatar on Friday afternoon, he asked the ministers and concerned officials to restrict the movement of the people.

The meeting was attended by the Cabinet ministers, members of High-level Coordination Committee for the prevention and control of COVID-19 and the COVID-19 Crisis Management Centre

According to Minister Dr. Khatiwada, the PM instructed the local and State governments to prevent people from travelling from one place to another. “They have to be stopped there where they are and the government should ensure lodging and fooding for those who are moving out from cities to villages, the PM instructed.

PM Oli further instructed high level committee to coordinate with the local and state governments and State Assembly Members to ensure food to those families who are having hard time to fulfill their livelihood.

According to Minister Dr. Khatiwada, PM Oli has also instructed the local and state governments to evaluate, monitor and manage the overall situation of lockdown and the preventive measures taken to contain the virus.