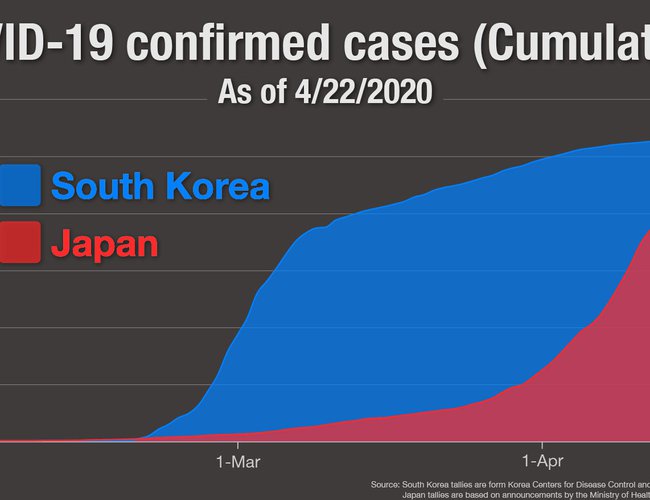 The number of confirmed coronavirus infections in Japan has now exceeded that of South Korea. As of Wednesday, the virus had infected 11,994 people in Japan, excluding people from the Diamond Princess cruise ship and 10,694 in South Korea. Japan has had 299 fatalities. The total death toll in South Korea is 238.

In South Korea, the first case was confirmed on January 20, according to the Korea Centers for Disease Control and Prevention (KCDC). Over the following month, only about 30 additional cases were recorded. In late February, over 800 new cases per day had been reported. But the figure has since been on the decrease and in double digits for the past two weeks or so. On April 19, the number of daily new cases nationwide fell to a single digit for the first time in about two months.

In Japan, the first case was confirmed on January 16, according to NHK tallies based on announcements by the Ministry of Health and local municipalities. The figure has been in the triple digits since late March. On April 11, 719 new cases were reported day.

The Japanese government announced a month-long state of emergency for Tokyo and six prefectures on April 7th.

The vast majority of cases in South Korea have been detected in and around the southeastern city of Daegu, with 6,836 as of Wednesday. That’s 63.9% of the national total.

Over half have been traced to the Shincheonji Church of Jesus. Shincheonji conducts missionary work around the world, including in Wuhan, the Chinese city where the coronavirus outbreak first emerged. There is speculation that a member brought the virus back to Daegu and triggered an explosion in infections.

Seoul, the capital, has avoided a worst-case scenario so far. The number of infections stood at 628 on Wednesday, just 5.9% of total. Busan, the second largest city, had 135 cases.

Tokyo has been the worst-hit in Japan, with 3,439 infections as of Wednesday. Health officials say it is impossible to trace the route of infection for over half of the cases.

The number of infections has been growing nationwide. Osaka Prefecture is second on the list with 1,380, followed by Kanagawa with 836, Chiba with 746, Saitama with 726 and Fukuoka with 563. The government responded by expanding the state of emergency for the coronavirus outbreak to the entire country on April 17.

While other countries have opted to postpone elections because of the coronavirus pandemic, the South Korean general election went ahead on April 15, and turnout was the highest in nearly 30 years. The vote is seen as a testament to the government’s success in containing the spread of the virus through mass testing, including drive-through testing facilities, isolation measures and actively disclosing information on people infected with the virus.

But President Moon Jae-in said in a speech on Sunday that there are still many issues to solve. He urged people not to let their guard down until the last infected person has fully recovered.

Japan’s Prime Minister Abe Shinzo on Wednesday called on people to continue their efforts to contain the spread of the coronavirus, two weeks after his initial declaration of a state of emergency.

Morishima Tsuneo, visiting professor at Aichi Medical University, has been tracking the virus since as it spread through Japan. He says he is worried about the rise in the number of cases where authorities cannot trace the route of infection.

" It's important to conduct more tests. We have to detect carriers at an early stage so we can treat them early and stop people from becoming seriously ill.”

China Registered 4.9 Percent Growth In The Third Quatar By Agencies 1 day, 22 hours ago

China On The Agenda For QUAD Talks In Tokyo By Agencies 2 weeks, 1 day ago