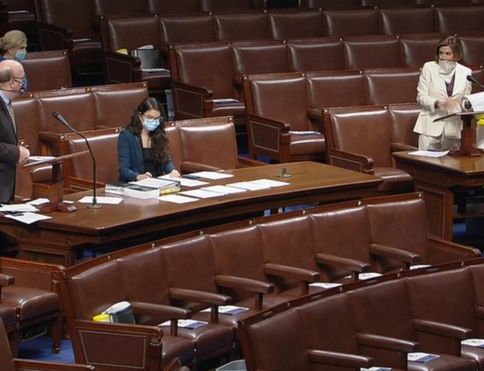 The US House of Representatives has passed a new Covid-19 relief package totalling $484bn (£391bn), the fourth aid bill to clear Congress in response to the pandemic reports BBC.

According to BBC, the legislation, approved by 388-5, devotes more money to a small business aid fund, hospitals and wider testing.

President Donald Trump said he will enact the bill, which passed the Senate unanimously on Tuesday.

Lawmakers have given $310bn in new funds to the Paycheck Protection Program, which offers loans to small businesses so they can keep employees on the payroll.

The $349bn allocated to the programme last month ran out last week, leaving millions of business owners questioning how they could keep operating.

A Massive Funeral Held For Woman Shot During Myanmar Protest By Agencies 3 days, 3 hours ago

Australian PM Is Vaccinated As Rollout Begins By Agencies 4 days, 2 hours ago

Biden Urged China To Compete In Accordance With Global Economic Rules By Agencies 5 days, 3 hours ago