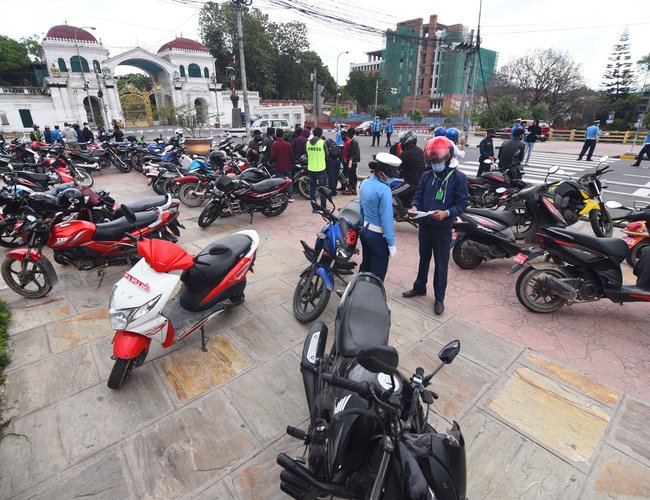 With the numbers of incidents of violation of lockdown increased in Kathmandu Valley, the Metropolitan Police Office, Ranipokhari intensified patrolling and checking.

On Tuesday, police arrested 1,387 people from the Valley, 1,048 from Kathmandu, 313 from Lalitpur and 86 from Bhaktapur district reports The Rising Nepal.

Today’s arrest (lockdown violators) was quite high in comparison to Monday’s arrest and the number of impounded vehicles. On Monday, police in the capital had detained 1,327 lockdown violators. Of them, 993 were from Kathmandu, 274 from Lalitpur and 60 from Bhaktapur. On the same day, Metropolitan Traffic Police impounded 340 vehicles, of them, 308 were two wheelers and 32 four wheelers.

On April 26, after the issuance of circular to all DAOs by the Ministry of Home Affairs to control the vehicular movements, the Metro police had impounded 453 vehicles from three districts of the Valley. Of them, 429 were two wheelers and 31 were four wheelers.

“Government issued passes are found misused by the vehicle owners in the name of distributing relief packages to the needy people while some were found plying vehicles even by correcting the old government passes,” said Senior Superintendent of Police (SSP) Kiran Bajracharya.

Some government vehicles, and medical supply vehicles too were found misusing the passes by carrying unnecessary passengers, whose jobs don’t fall under essential service, she said.

Twenty-one four wheelers were found misusing the government passes and they were impounded during the security checking on Tuesday, she said.

Meanwhile, Deputy Inspector General and chief at Metropolitan Police Office Bishwa Raj Pokhrel said that after the Ministry’s new circular to all DAOs on Monday, not a single passenger on a bus was allowed to enter from Thankot check post and other borders adjoining the Valley.

UN Commences International Day of Commemoration In Memory Of The Victims Of The Holocaust By NEW SPOTLIGHT ONLINE 7 hours, 4 minutes ago