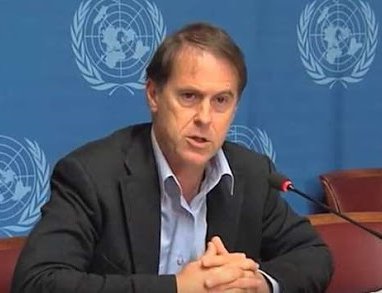 “We hope the Nepal Supreme Court's decision to stand by its ruling against amnesties for serious human rights violations committed during the decade-long armed conflict will provide an opportunity to revitalise the country's long-stalled transitional justice process in line with international norms and its international commitments,” said in her recent press briefing.

On 26 April, a full bench of the Supreme Court set aside the Government of Nepal's petition to review the court's decision in February 2015. In that decision, the court had struck down a clause giving the Commission on Truth and Reconciliation and the Commission on Investigation of Disappeared Persons the power to recommend amnesties for serious human rights violations committed during 1996-2006 internal conflict. In an earlier judgement in January 2014, the Supreme Court had already stated that there could be no amnesties for serious human rights violations.

“The Supreme Court's decision reconfirms that the only way for the Government to credibly proceed with the transitional justice process is to abide by the key human rights and transitional justice principles reflected in the Supreme Court's 2015 ruling, including the centrality of victims and the importance of accountability for serious violations. Victims' advocacy groups and civil society members have welcomed the court's decision, and so do we,” reads the statement.

In 2019, the Government sought to revive the transitional justice process and publicly committed to organise broad-based consultations with victim groups and civil society.

But the authorities rushed through consultations in January 2020 that failed to take on board the concerns of key stakeholders, which the UN Human Rights Office shares. They subsequently appointed new commissioners to the two Commissions without first amending the transitional justice law to bring it in line with international law and the Supreme Court ruling. Victim groups and civil society members felt alienated by the process.

“We call on the Government of Nepal to take the Supreme Court's decision as an opportunity to change course and pursue a truly fair and transparent transitional process that will win the trust of key stakeholders. The process must be truly consultative, with the rights and interests of victims firmly at the centre. The transitional justice legal framework must be amended to meet the principles established by the Supreme Court in its 2014 and 2015 rulings and Nepal's commitments under international law. The UN Human Rights Office and Special Procedures have regularly engaged with the Government and made practical recommendations to that effect,” said a press release.

Nepal Is Committed To End All Kinds Of Discrimination: Foreign Minister Gyawali By Agencies 5 days, 8 hours ago