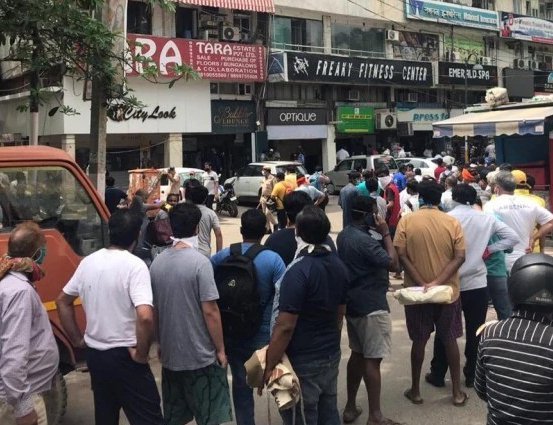 People in huge numbers started queuing up outside liquor shops in Delhi from early morning on Monday. The queues were seen as early as 7.30 am in some parts of the national capital where around 150 liquor shops were reopened as the lockdown entered the third phase.

The scenes were similar across several states, including Karnataka and Maharashtra.

People were seen gathering outside the liquor shops from early morning even before the shops could open for sales. Liquor shops across the country were shut down with the lockdown that was announced on March 24.

In Kashmere Gate, police had to resort to lathicharge outside a liquor shop where people refused to follow social distancing norms and were seen standing very close to each other in the long queues.

With MHA ordering relaxations, liquor shops have been opened up across the country but with some strict guidelines of social distancing. However, photos and videos from Delhi, Karnataka and other parts of the country show little of these norms are being followed by people.

Meanwhile in Delhi, police was forced to shut down one such liquor shop in Jheel Chowk area due to overcrowding. Crowds gathered in huge numbers and refused to abide by the social distancing norms.

AAP MLA Somnath Bharti shared a video on Twitter and said the crowds at a Malviya Nagar liquor shop has triggered panic among the locals.

The queue outside a liquor shop in Delhi's Desh Bandhu Gupta Road was over 1 kilometre long, reported ANI.

According to a PTI report, in Karnataka, people crowded the liquor shops while some even offered special prayers with flowers, coconuts, incense sticks in front of the stores.

Kanwar Groups Call Off Yatra After UP Government’s Appeal By Agencies 2 weeks, 3 days ago