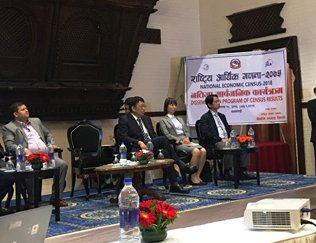 CBS published the National Economic Census date focusing on Annual sales, profit and loss.T he report shows that Kathmandu came out to be largest district in annual sales accounting 28.5% with NRs. 832 billions followed by Lalitpur and Morang. Kathmandu was also the largest district in terms of Annual profit and loss. CBS will subsequently publish the remaining report in the days to come.

The Central Bureau of Statistics (CBS) conducted the first ever National Economic Census 2018 with the technical support from Japan International Cooperation Agency (JICA).

The data shows the Annual sales of Nepal came out to be NRs. 2,916 billion in Nepali fiscal year 2074. Manufacturing was the largest section with NRs. 674 billions accounting for 23.1 % followed by Wholesale and retail trade with NRs. 601 billions accounting for 20.6%. Annual profit and loss were NRs. 853 billion in FY 2074. “Registered” entities annual sales accounted for 92.0% amounting NRs 2,682 billions where as “Not registered” entities were NRs 233 billion with 8.0% share.

The reference date of the census operation was April 14, 2018 which covered all fixed and movable establishments that existed in Nepal. CBS has earlier published the National Reports regarding the number of establishments by industry; size of persons engaged in these establishments and disintegrated data up to provincial and district level.

Nepal’s Economy Projected To Grow by 2.7 Percent In FY2021 By NEW SPOTLIGHT ONLINE 1 week ago