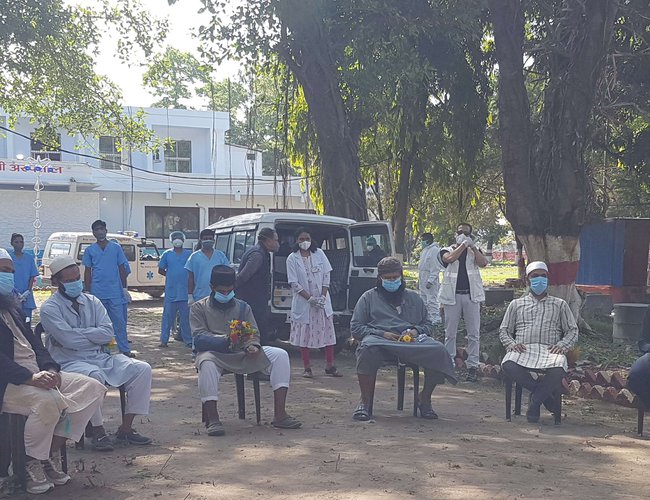 Social Development Minister Jeevan Ghimire handed over flower bouquet to those who discharged from the hospital. He said that they will be placed 14 days quarantine in a Madarsa in Rani.

Minister Ghimire said that they released from the hospital following three trials of their swab in 14 days period. As they came to Nepal for religious purposes from India, they will be accorded as guest treatment and will be handed over to concerned officials after lockdown.

Coronavirus Treatment Center of Kosi Hospital still has 25 patients with 22 from Udaipur, 2 from Jhapa, and 1 from Bhojpur. In his full enthusiasm, 34 years old Mohammad Ajirwan said that all six of them are Indian Jamatis from South New Delhi. He thanked doctors and other officials for cordial behavior and good treatment.

Six Indian citizens infected with coronavirus from Udaipur discharged from Kosi Hospital today following recovery. According to Hospital, out of 31 admitted in the hospital, the six patients, who were discharged today, tested negative following 13 days in treatment.

All six are Jamatis and resident of South Delhi. He also said that the health condition of other patients is also normal. All these six Indian Jamatis were taken to hospital from Bhulke of Udayapur after they were tested positive.

Province 1 government will place all six in further 15 days quarantine in a mosque in Rani. In a press conference, the superintendent of Kosi Hospital Dr.Sangita Mishra said that the swab of six persons was come negative. They were admitted to the hospital on April 17.

There are now 31 patients undergoing treatment. Out of them 28 from Udayapur, 1 from Bhojpur and 2 from Jhapa.

Nepal Is Committed To End All Kinds Of Discrimination: Foreign Minister Gyawali By Agencies 2 days, 2 hours ago