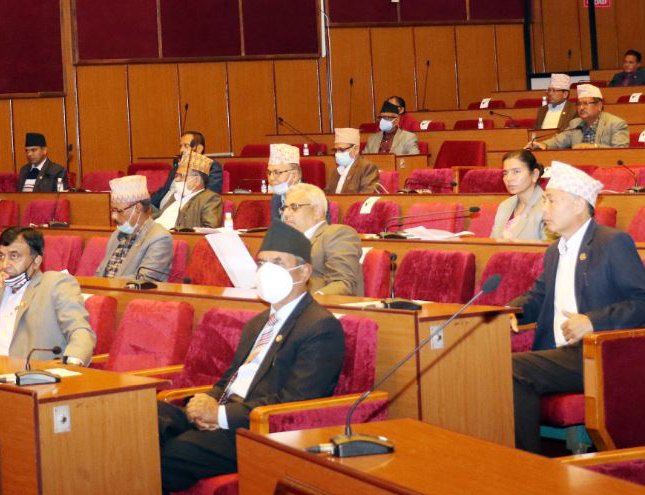 The parliamentarians have demanded with the government to address the issues of border management and to put fences in the border at the earliest reports Rastriya Samachar Samiti (RSS),

In the zero hour of today’s National Assembly meeting, the parliamentarians highlighted the need for the government to resolve the border issues through diplomatic channels and not to spare even an inch while bringing back the encroached territory.

Some lawmakers pledged to donate their salaries for the fencing in the border areas. The 80-km link road was inaugurated by Indian government last Friday through video conferencing. It originates from Ghatiabagarh in India and terminates at Lipu Lekh Pass that lies in Nepal.

The parliamentarians further said Indian side had never dealt with Nepal in a friendly manner, often eyed on Nepal’s land and troubled Nepal by constructing road illegally and they urged the government to resort to other ways if need be besides political and diplomatic channels to address the issue.

Anita Devkota condemned the comment of the government that it was oblivious about the construction of road by Indian side in Lipulek and demanded explanation from the government about its ignorance on the matter.

Indu Kadariya voiced to demarcate Nepali border and put fences in the border from east to west as, according to her, India had been repeatedly troubling Nepal and encroaching border again and again. She pledged to donate a year of her salary to the government if it is to put fences in Nepal’s border.

Udaya Sharma Poudel spoke for the need to permanently resolve the border issues.

Kabita Bogati decried the attitude of India towards Nepal and urged the government to put an end to the situation wherein every Nepali has to put on with India’s attitude. She prodded, “We should work in ‘now or never’ attitude.”

Ganga Kumari Belbase said although Kalapani River belonged to Nepal, India had created an artificial Kalapani and a pond to intrude on Nepal’s territory. She viewed that the government should not compromise at all when it comes to safeguarding Nepal’s border.

Taradevi Bhatta demanded an immediate rescue of the stranded Nepalis abroad, especially in the Gulf countries. She also urged the government to make proper arrangement for the Nepalis in India.