To reduce the impacts of fire in Nepal, Nepal needs to build the capacity of fire stations and fire fighters in fire preparedness and response mechanisms, establish operation and maintenance fund, enforce policy provisions, and mainstream good practices and learning in local government acts, regulations and strategies. 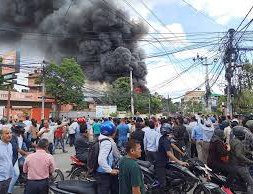 In Nepal, fire is a recurrent disaster, one that takes a heavy toll in terms of lives and properties. When people lose their houses, their main assets, and the valuable property within, they often fall into poverty. It is in urban areas that fires have the most potential to become hazards. In inner-city areas of fast-growing urban centres, houses are old, made with wooden joists, and placed in close proximity. Such houses are vulnerable, as fire easily leaps from one house to the next, spreading rapidly, and damaging entire settlements. Fires in Taplejung and Bhaktapur (2020) and Kathmandu and Banke (2019) are some notable fires that have occurred in recent years. Nepal’s largest fires ever occurred at Singha Darbar in 1971, the Bhirkuti paper factory in Nawalparasi District in 1984, in the districts of Tehrathum and Ramechhap in 2008 and 2009 respectively, and in the Bhutanese camps of Jhapa and Siraha in 2001 and 2012 respectively.

Fire breaks out due to technological, human and agricultural phenomena. Technological fires are a result of gas leaks and explosions of gas cylinders and kerosene stoves; short-circuiting of electric heaters, irons, TVs, and other electrical appliances and faulty wiring; the collision of electric wires during high-velocity wind storms, fluctuations in voltage, and low-strung electric poles; and explosions of solar panel batteries. Human-induced fires are the result of children’s easy access to matches, smoking, burning mosquito coils, using candles and oil lamps during load shedding, theft of electricity, feeding cooking stoves with rice husks, preparing animal feed on outdoor stoves and family disputes. Use of mechanical threshers and burning straw for manure are agricultural activities that can result in fires.

Each year, various types of fires are responsible for causing heavy loss and damage. Data from the Ministry of Home Affairs (1971- 2018) revealed that in the last 50 or so years there have been a total of 12,694 fire incidents that have killed 1,755and injured2,176 individuals, affected 265,962 families, and damaged 90,044 houses. In 2018 alone, 87 people were killed and 342 injured in 2,478 fires incidents. In addition, 1,857 houses were destroyed and 291 damaged, causing a financial loss of around 3.96 billion. The estimated property loss associated with climate-induced disasters was approximately NPR 6.84 billion, and about 94% of that loss can be attributed to fire incidents. Though ECHO, the UNDP and the government have contributed to building fire preparedness and response mechanisms, their efforts have not been adequate and such mechanisms are still not prioritized by the government, private sector, or civil society.

Effective fire preparedness must include mechanisms to douse fires by building the capacities of fire fighters, alerting rescue operations, and using a variety of fire attack and suppression methods. Fire stations play a key role in national emergency management but they are barely functional. Most of Nepal’s fire engines are so old that they overheat and cease to function after two to three hours of operation. Fire engines, fire fighters, rescue vehicles, fire truck and fire ladders are inadequate to respond effectively to fires.As per international standard, there must be at least one fire fighter for every 2,000 and one fire engine for 28,000 populations.The capacities of fire fighters for fire management planning are low in the absence of refresher trainings and drills. Since the water pumps of the majority of the fire engines do not function well, it is difficult for water sprays to reach the second stories of buildings, let alone higher the stories now commonplace in peri-urban and urban areas. Because there are so few light portable pumps and suction and delivery hoses, managing the water supply to extinguish a fire is a challenge. Functional fire hydrants are also limited; thus, fire engines have to travel far from an incident site to fetch water. In the absence of platinum chemical foam and sufficient fire extinguishers, the preparedness for technological fires is poor too. Existing emergency health facilities are not well equipped to manage large-scale fire emergencies either. The number of special beds available for burn cases is also limited.

In addition, fire stations lack sufficient tools and equipment for operation and maintenance (O&M). Personal safety materials are also inadequate. Petrol pumps and shops that sell LPG gas in residential areas have further increased the risk of fires because they lack even the most basic of fire safety equipment because fire in one petrol pump can create destruction in around 1 km diameter. The narrow roads and overhead cables in inner cities restrict the access of fire engines. Besides, their turntable ladders are too large and cumbersome to be of any use. Even though a few public buildings like hospitals and cinema halls are equipped with fire alarms and extinguishers, they often do not function because they are not maintained periodically. There are around 300,000 buildings in Kathmandu Valley very few buildings have fire fighting tools and equipment. The inter-agency coordination among fire stations, drinking water offices, the Nepal Police, the Nepal Army and the Nepal Electricity Authority is also limited.

The speed of response is extremely problematic, too. Some of the complicating factors include (I) late communication, (ii) slow fire engines, (iii) speed breakers in unnecessary locations, and (IV) unmanaged traffic and uncooperative drivers who do not pull to the side when they hear a siren. One reason for the lateness of messages is that a large proportion of the population is still not aware that the fire station's telephone number is 101.

Fire management entails preparedness and response planning. Preparedness includes fire risk and threat mapping, the analysis and dissemination of information about wind flow, and the installation of fire detectors and extinguishers. Fire response plans should include (i) warning, call, and notification procedures, (ii) the alert at the incident site, (iii) plan activation and debriefing, and (iv) analysis and deactivation but no fire station at present adheres systematically to such provisions.

Many local governments have no clear standard operating procedures to regulate fire engines within and beyond their physical boundaries. Policy provisions for fire preparedness and about the roles and responsibilities of various government sectors are also limited. The Fire Safety Code of the Nepal National Building Code (NNBC 107:1994) is limited to the provision of fire alarms and other appurtenances. It does not include requirements regarding design considerations or the fire-grading of building materials based. The Fire Safety Code is not enforced, so even buildings which do not comply with its terms are issued permits. The code itself is deficient. While it does specify minimum requirements regarding fireplaces, fire extinguishers, water storage for fire extinguishment, the demarcation of fire zones, and generalities like proper access, wide doors, fire escape ways, exit doors, fire stairs, open space, and lightning arresters and conductors, it does not consider fire safety codes for the use of electricity, gas, or fuel. The provisions of this code and its policies have not been integrated into municipal building bylaws. Though the Fire Prevention and Protection Act (1997), the Local Self-Governance Act (1999), and the Fire Brigade Operation and Management Guidelines (2010) addressed some provisions for fire preparedness and response, officials at every tier of government have only limited knowledge about those provisions.

Improved fire services should include three components--prevention, protection and response--but fire stations in Nepal lacks all three components. To foster fire preparedness and mitigation measures, both structural and non-structural initiatives are required. Structural initiatives include the storage of sufficient hydrogen gas, liquid fuel, and platinum chemical foams and the periodic replenishing office extinguishers. Spare parts need to be stockpiled and water-lifting systems using portable generators need to be arranged. Separate fire engines which can offer integrated services are needed to handle fires in industrial areas. There is also a need to provide personal protective equipment along with search-and-rescue materials. Given that urban centres are growing in population and fire risk, there is a need for more fire engines with extension ladders and elevators. Battery-run fire alarms are needed so they work even when there is load shedding and awareness on the importance of fire detectors and fire extinguishers needs to be built.

In terms of non-structural initiatives, there is an urgent need to assess fire preparedness, mitigation and response initiatives in the most at-risk wards. An inventory of fire hydrants in each fire-prone ward is also required. Periodic training and orientation on fire risk management for firefighters, local government officials, security agencies, scouts, the NRCS, fire control teams and local youths need to be offered. There is a need to monitor gas dealers and petrol pumps to ensure that owners implement adequate safety measures. Knowledge of fire preparedness and fire-safety measures, including the proper handling of gas cylinders and the inspection of electrical wiring systems, needs to be disseminated through FM radio and television channels and social media. There is an urgent need to relocate fire brigades in the outer peripheries of cities so that they can avoid heavy traffic and thereby be able to respond to fire events quickly. Cost-sharing mechanisms should be used to generate additional funds for O&M.Local governments should form and activate ward-level fire fighting sub-committee, design trainings to meet the needs and organise them during the wet season, and advocate for special burn units in hospitals in coordination with provincial and federal governments. To make robust fire preparedness and response, there is a need of stock-taking fire related incidents, reviewing fire related policy provisions, identifying current gaps through empirical studies, and formulating comprehensive fire policies.

The “Safe School” Campaign: Is Nepal moving In The Right Direction?
Sep 12, 2022
Nepal’s DRRM Policy Landscape: Well On The Way To Making Nepal Ready And Able To Respond To Disasters
Aug 22, 2022
How Prepared Is Nepal For Future Disasters?
Aug 09, 2022
Without Cooperation, Water-Induced Disasters Will Continue To Wreak Havoc
Jul 27, 2022
COVID-19 And Social Protection: WhatAre The Next Steps?
Jun 11, 2020