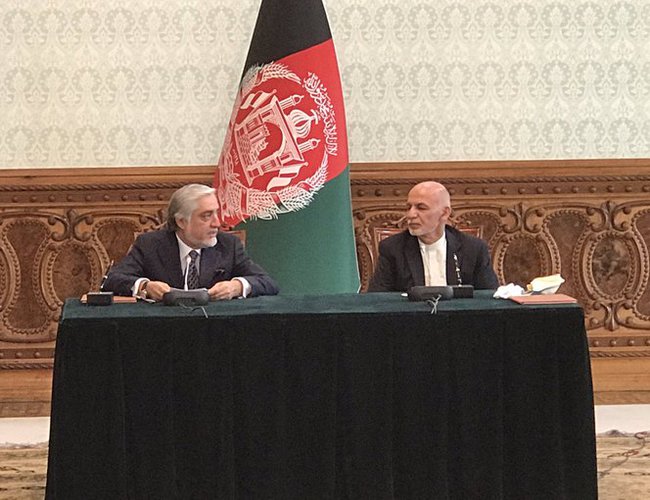 Under the agreement, Abdullah will lead council for peace talks and members of his team will be included in the cabinet.

Afghan President Ashraf Ghani and his rival Abdullah Abdullah signed a power-sharing deal on Sunday, signalling the end of a months-long stalemate that plunged the country into a political crisis.

The breakthrough, which sees Abdullah heading peace talks with the Taliban, comes as Afghanistan battles a rapid spread of the deadly coronavirus and surging violence that saw dozens killed in brutal attacks last week.

Ghani said it was a "historic day" for Afghanistan and the agreement was reached without any international mediation.

"We will share the burden and our shoulders, God willing, will be lighter," he said, addressing Abdullah at the signing ceremony broadcast on a state-run television channel.

"In the days ahead, we hope that with unity and cooperation, we would be able to first pave the ground for a ceasefire and then lasting peace."

"It's meant to ensure a path to peace, improve governance, protect rights, respect laws and values, he said on Twitter after signing the deal.

Abdullah had previously served as Afghanistan's "chief executive" under an earlier power-sharing deal but lost that post after he was defeated in a presidential election that the incumbent Ghani won in September.

But Abdullah rejected the election results, alleging fraud. He declared himself president and held his own swearing-in ceremony on March 9, the day Ghani was reinstalled as president.

The agreement further says that Ghani will make Abdul Rashid Dostum, his former vice president turned ally of Abdullah, a marshal of the armed forces. Dostum, a notorious military commander, was accused of ordering the torture and rape of a political rival in 2016.

The agreement names Abdullah to lead future peace talks with the Taliban, which has already signed a landmark accord with the United States to pave the way for the withdrawal of foreign forces from Afghanistan.

US Secretary of State Mike Pompeo on Sunday welcomed the power-sharing deal.

"Secretary Pompeo noted that he regretted the time lost during the political impasse," State Department spokeswoman Morgan Ortagus said in a statement.

"He reiterated that the priority for the United States remains a political settlement to end the conflict and welcomed the commitment by the two leaders to act immediately in support of prompt entry into intra-Afghan negotiations."

NATO, which maintains a training mission in Afghanistan, hailed the deal and urged Afghan leaders and the Taliban to work for peace.

"We call on the Taliban to live up to their commitments, reduce violence now, take part in intra-Afghan negotiations, and make real compromise for lasting peace," NATO chief Jens Stoltenberg said in a statement.

Despite 18 years and billions of dollars in international aid, Afghanistan remains desperately poor. The poverty level soared from 35 percent of the population in 2012 to more than 55 percent last year.

At Least 20 Demonstrators Killed In Myanmar By Agencies 4 months, 2 weeks ago

Japan To Tighten Restrictions On Arrival By Agencies 7 months ago

Japan Grapples With Record-level Increase In COVID-19 Cases By Agencies 7 months, 3 weeks ago

Prince Akishino Proclaimed First In Line To Throne By Agencies 8 months, 3 weeks ago