Cyclone Amphan tears through West Bengal-Odisha and Bangladesh: Over 10 dead in Kolkata and five dead in Bangladesh. 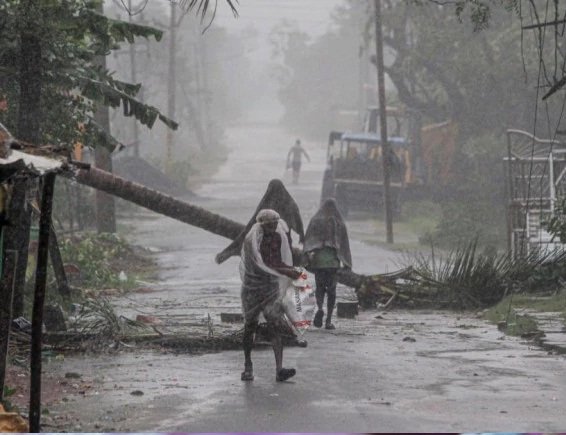 Cyclone Amphan tears through West Bengal-Odisha and Bangladesh: Over 10 dead in Kolkata and five dead in Bangladesh.

While a man and a woman were reported killed when trees came crashing down on them in North 24 Parganas district of West Bengal, a 13-year-old girl died in a similar incident in adjoining Howrah. CM Mamata Banerjee claimed that at least 7-8 deaths have been confirmed due to the cyclone and many more are expected to be dead.

At least two people, including an infant, lost their lives as Cyclone Amphan ravaged through coastal Odisha.

The first casualty of the storm was a 57-yr-old woman of Satbhaya in Kendrapara who reportedly stayed back at home instead of moving to the nearest shelter home. While a two-month-old baby boy died due to wall collapse in Kampada village in Tihidi block of Bhadrak district.

West Bengal Chief Minister Mamata Banerjee, who is monitoring the situation from Nabanna, the state secretariat, however, claimed at least 10-12 people lost their lives.

"Area after area has been ruined. I have experienced a war-like situation today. Such a devastating storm took place in 1737. I am sitting in the war room. My office in Nabanna is shaking," she exclaimed.

"At least 10-12 people have died. Nandigram, Ramnagar....the two districts of North and South 24 Parganas are destroyed. Patharpratima, Namkhana, Kakdwip, Kultali, Baruipur, Sonarpur all are pictures of the devastation. Rajarhat, Hasnabad, Sandeshkhali, Gosaba, Habra are all in danger," she added.

After making landfall at 2.30 pm between Digha in West Bengal and Hatiya island in Bangladesh, cyclone Amphan cut a swathe through the coastal areas, flattening fragile dwellings, uprooting trees and electric poles. At least 6.58 lakh people were evacuated in West Bengal and Odisha before the cyclone struck.

Heavy rains, tidal surges up to 9 feet; at least 5 die; 50 lakh without electricity; over 24 lakh people moved to cyclone shelters

More than 24 lakh people were moved to safety in 19 coastal districts as Cyclone Amphan bore down on the country's coast yesterday afternoon, causing heavy rains and tidal surges up to nine feet.