PIA Plane Crashed In Karachi, Many Are Feared Dead

PIA Plane Crashed In Karachi, Many Are Feared Dead 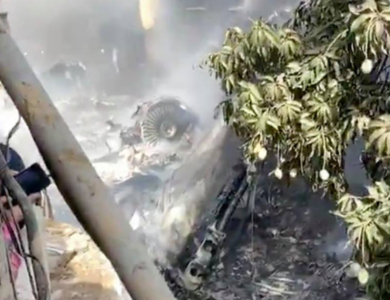 As the rescue operation continues, it is yet to know the casualties in the ilfated Pakistan International Airlines Flight PK8303, which was carrying around 91 passengers and eight crew.

Emergency services have arrived. There is no confirmation on casualties so far, but many are feared dead.

The plane, an Airbus A320, was about to land when it crashed near Model Colony, a neighbourhood of Karachi about 3.2km (two miles) north-east of Jinnah International Airport.

Saad Edhi, spokesperson of the Edhi Foundation, said they have shifted 13 bodies from the plane to different hospitals. Around 25-30 injured people, who are residents of the area, have also been brought to the hospital.

He said nothing concrete could be said about the number of deceased and survivors as of now. Pictures showed a scene of devastation in the Model Colony residential area.

Prime Minister Imran Khan said he was "shocked and saddened by the PIA crash"."Am in touch with PIA CEO Arshad Malik, who has left for Karachi, and with the rescue and relief teams on ground as this is the priority right now. Immediate inquiry will be instituted. Prayers and condolences go to families of the deceased," he said in his tweet.

Footage showed plumes of smoke rising from the site of the crash within the congested residential area. Ambulances and rescue officials arrived at the scene to help residents. Eyewitness told DawnNewsTV that the plane was on fire in the air before crashing. 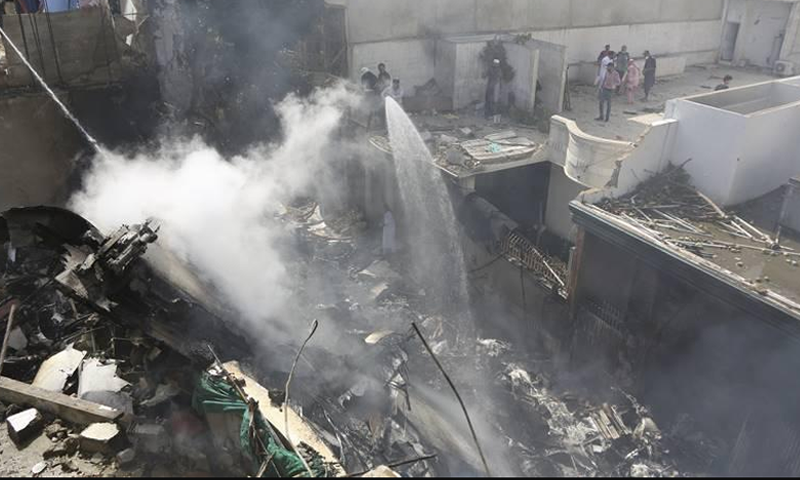 Videos from the crash site obtained by Dawn.com showed bodies buried underneath rubble and residents gathering in streets littered with debris while Rangers and Sindh police carried out rescue operations.

Another video showed Edhi workers and firefighters hosing down the remains of the aircraft and searching for survivors.

"Our crew is trained to handle emergency landings. All my prayers are with the families. We will continue to provide information in a transparent manner," said Hafeez.

Chief Marshal Mujahid Anwar Khan, Chief of the Air Staff, Pakistan Air Force expressed grief over the tragic air crash. He further said that PAF stands by PIA at this difficult time and extends all out support in the rescue operation.

Federal Aviation Minister Ghulam Sarwar also expressed deep grief and sadness over the incident and has ordered the Aircraft Accident Investigation Board to conduct an "immediate inquiry" into the crash.

Last year, a PIA aircraft escaped accident after it skidded off the runway while landing at Gilgit airport.Passengers had remained safe in the accident, but the plane suffered considerable damage.

Source: Dawn and other news agencies