Nepal Army To Open A Section Of Road In Darchula Soon

Nepal Army To Open A Section Of Road In Darchula Soon 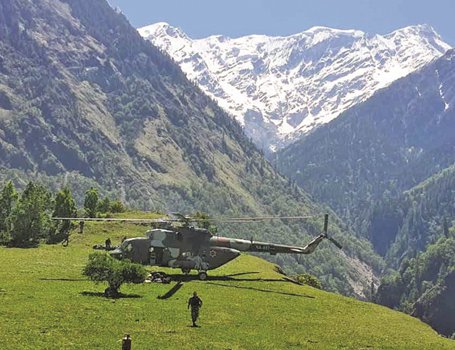 Nepal Army said that one of its squad has reached Ghanti Bagar of Byas Gaunpalika-2 in Darchula district to construct 87-km road under Darchula-Tinkar road project in the Mahakali corridor.

Establishing its station at Thi area near Ghanti Bagar, the NA has begun preparation to start work to open the 450 metres road section. The track will be two-metre wide reports The Rising Nepal.

Other required logistics and necessary forces will reach there on Friday, according to Directorate of Public Relations and Information of the Army Headquarters.

“Once the army in the first phase will open the 450-metre road section in between the Mauri Bhir and Ghanti area, around 1,200 residents of 182 households there do not have to travel via the Indian route to come to their village,” stated a press release issued by the DPR&I.

According to the daily, a section plus number of Nepali Armymen have flown to the area on Thursday after the government on April 26, 2020 decided to hand over the road construction project there to the Nepali Army.

A meeting of the Darchula District Security Committee held last week had decided to immediately request the Federal government to open at least the 450-metre road section of the area for free movement of Nepali citizens.

Constitution Unites The People Of Nepal: PM Deuba By Agencies 10 hours, 40 minutes ago