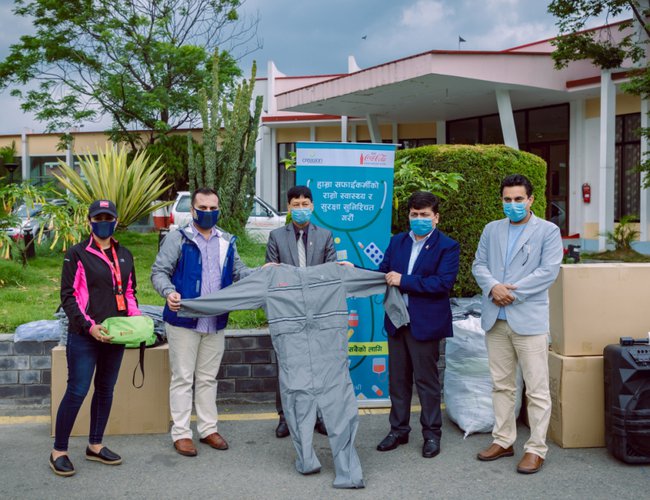 CREASION Nepal with the support of The Coca-Cola Foundation has successfully conducted the second week of distribution programs as part of the ongoing Waste Workers Emergency Relief Project (WWERP) in various locations in Bhaktapur, Kathmandu and Kritipur.

The team reached out to around 160 waste workers where protective jumpsuits and ration packages were distributed in Bhaktapur and Kathmandu. The distribution in Bhaktapur was conducted under the facilitation of Doko Recyclers, and the local government with the presence of Colonel Shiva Paudel, Bir Dal Ganapati and SP Sabin Pradhan of Metropolitan police circle of Bhaktapur. Simultaneously on the same day in Kathmandu,a second distribution event was held at Rashtriya Sabha Griha in the presence of the Mayor of Kathmandu, Mr. BidhyaSundarShakya.

In addition to this, over 252 ration packages and 175 safety gears which includes protective jumpsuits, masks and boots, were provided to waste workers of various areas such as Kritipur, Durbarmarg, Ratopool, Tokha and Budhanilkantha through the last three days of the past week. These distribution programs were conducted successfully under the facilitation of consortium partners Blue Waste to Value, Women for Human Rights, Himalayan Climate Initiative and Nepsemyak.

The WWERP project which formally commenced from 15th May, 2020, has so far benefited over 1100 waste workers through ration packages and safety gears along with awareness programs and medical consultations.The project was initiated in a response to combat the ongoing COVID-19 pandemic and aims to positively benefit 3200 waste worker beneficiaries across Nepal.The project will be carried out in different municipalities of Kathmandu, Kirtipur, Lalitpur, Bhaktapur, Chitwan, Saptari and Siraha.

Regarding the same, we have attached the press release herewith. We humbly request you to publish the news along with picture and logo attached.

NEPAL-INDIA RAILWAY Greater Access To Services By A Correspondent 1 week, 6 days ago