Locust Are Coming Closer , Nepal Is Yet To Announce Measures

Locust Are Coming Closer , Nepal Is Yet To Announce Measures 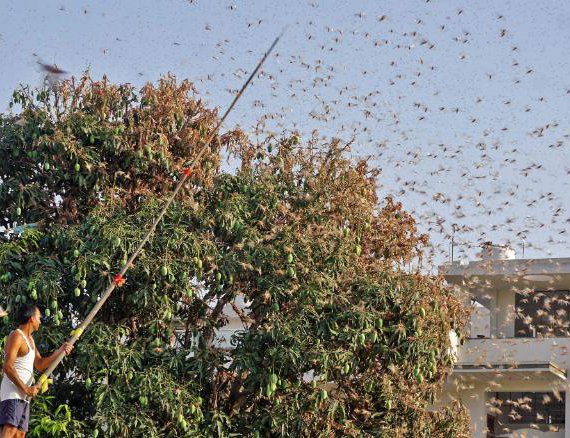 As locust are creating havoc in various Indian states and gradually moving to eastwards, they will pass through close to Nepal. However, Nepal is yet to make preparation to fights locust invasion.

In the past, Nepal also attacked by locust and effectively handeled it.

"Several successive waves of invasions can be expected until July in Rajasthan with eastward surges across northern India as far as Bihar and Orissa followed by westward movements and a return to Rajasthan on the changing winds associated with the monsoon," according to the Desert Locust Situation Update issued by the FAO

Waves of desert locusts -- millions strong and stretching up to 7 kilometers (4 miles) long -- crossed into India's western state of Rajasthan from neighboring Pakistan in early May and swarms have since pushed into five different states in search of food.

The desert locust is the most destructive of all locust species because of its speed and ability to multiply rapidly, according to the Food and Agriculture Organization (FAO) of the United Nations. Adult locusts can fly up to 150 kilometers (93 miles) a day and eat their own body weight -- equal to 2 grams -- worth of fresh vegetation in that period.

The FAO said much of the locust movements were driven by the strong westerly winds in the wake of Cyclone Amphan in the Bay of Bengal, which slammed into India and Bangladesh on May 20, killing at least 90 people and causing more than $13.2 billion dollars in damage.

From Rajasthan, the swarm entered Uttar Pradesh -- which borders the capital New Delhi -- in the north, Madhya Pradesh in central India and Maharashtra and Gujarat in the west on Thursday, according to India's agriculture minister.

Other states have been put on alert. Jharkhand in the country's east, issued a state-wide alert to farmers on Sunday to prepare for locust swarms, according to P K Sannigrahi, senior scientist at the Krishi Vigyan Kendra Knowledge Network in the state.

"Lighting a fire, bursting crackers, banging plates and tins, and playing the drums as well can chase locusts away, these insects can't tolerate loud noises," the advisory issued to farmers read.

The New Delhi government also issued an advisory to be prepared if the swarms turned toward the national capital.

Swarms of locusts are seen atop a residential building in Jaipur in the Indian state of Rajasthan on May 25.

Hard-hit states have been carrying out locust control operations that include dispersing the flying insects with drones, tractors, and fire engines.

Rajasthan, which was the first to be impacted by the locusts, has been conducting daily operations since May 22.

"The locusts were sitting in an area that was 7 kilometers (4 miles) long and 1.5 kilometers (0.9 miles) wide. We started the control operations around 1 a.m. (Tuesday) along with the Locust Organization team," said B R Karwa, a deputy director of Rajasthan's Agriculture Department.

State officials are using 100 tractor-mounted sprayers and 20 fire engines across 11 districts to spray water and pesticides. Drones provided by the central government were also used to spray pesticides in two districts in Rajasthan, according to Karwa. He added that about 70% of the locusts there had been destroyed.

Despite dispersal operations, locust infestations could continue into next month. 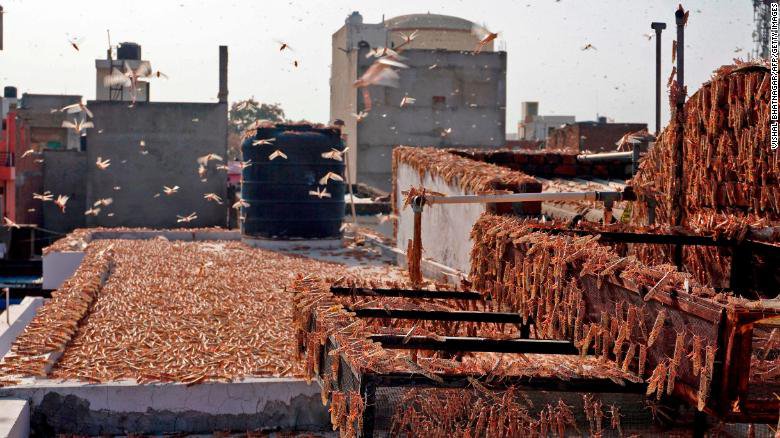 "Several successive waves of invasions can be expected until July in Rajasthan with eastward surges across northern India as far as Bihar and Orissa followed by westward movements and a return to Rajasthan on the changing winds associated with the monsoon," according to the Desert Locust Situation Update issued by the FAO.

The locusts have flown into India from their breeding areas in Pakistan, according to Om Prakash, a Rajasthan-based plant protection officer for the Locust Warning Organization.

While locust invasions can be devastating for communities because they pose a threat to food security, India has so far appeared to have escaped from the worst as farmers have not yet begun to sow the new season's crops.

"The locusts were sitting on barren land. The winter crops have been cut and it hasn't rained yet so the new season's crops have not been sown. Those who planted fodder crops or vegetables could chase the locusts away. This time, there wasn't much loss," said Karwa.

Earlier this year, the Horn of Africa was hit by the worst invasion of desert locusts in 25 years, devastating large swaths of food and pasture in the region.

There Need To Strike Balance Between Development And Environment: Chief Secretary Bairagi By Agencies 2 months ago