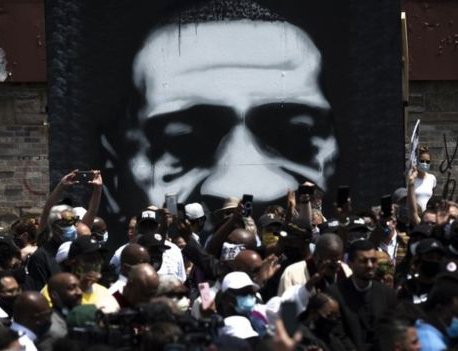 A lawyer for George Floyd has told a memorial service that a "pandemic of racism" led to his death.

Those gathered at Thursday's tribute stood in silence for eight minutes, 46 seconds, the amount of time Floyd was alleged to be on the ground under the control of police in Minneapolis.

It was time to stand up and say "get your knee off our necks", he said.

Mr Floyd's killing, which was captured on video, has caused outrage and sparked a wave of protests in cities across the US.

Meanwhile, a few blocks away, three police officers charged with aiding and abetting Mr Floyd's murder made their first appearance in court. Bail was set at $1m (£800,000) but would be lowered to $750,000 if they handed in any guns they owned and met other conditions, the judge said.

Derek Chauvin, the officer who continued to kneel on Mr Floyd's neck as he pleaded that he could not breathe, has been charged with second-degree murder and is due to appear in court on Monday.

The vast majority of demonstrations over the past eight days have been peaceful, but some have descended into violence and rioting, with curfews imposed in a number of cities.

What happened at the memorial?

"It was that other pandemic," he said. "The pandemic of racism and discrimination."

Philonise Floyd, one of Mr Floyd's brothers, described how the family had been poor when he and Mr Floyd were young and had washed their clothes in the sink and dried them in the oven.

"It's crazy man, all these people came to see my brother, it's amazing he touched so many hearts," he said.

"We won't stop," he said, referring to protests that have taken place in every US state. "We're going to keep going until we change the whole system of justice."

In an emotional eulogy, he said Mr Floyd's story had echoed that of black people in America.

"What happened to Floyd happens every day in this country, in education, in health services and in every area of American life. It's time for us to stand up in George's name and say: get your knee off our necks," he said.

Further tributes will be held at Mr Floyd's birthplace of North Carolina on Saturday, and in his hometown of Houston on Monday.