Protests Against Racism Continue In US

Protests Against Racism Continue In US 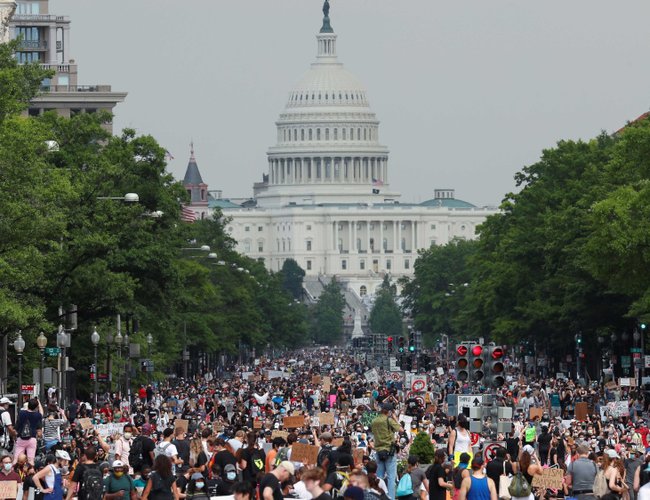 Protesters chanting "Black Lives Matter" and "George Floyd" converged on the United States capital on Saturday thronging the streets from the Capitol building to a barricaded White House and the Lincoln Memorial, in the largest protest the city has yet seen.

Military vehicles and officers in fatigues had closed off much of downtown Washington, DC to traffic, as protesters stirred by the death of George Floyd - who died on May 25 after a white police officer in Minneapolis knelt on his neck for nearly 9 minutes - flooded the streets chanting and carrying signs including "Get your knee off our necks".

Demonstrators march from the US Capitol Building during a protest against racial inequality after the death in Minneapolis police custody of George Floyd, in Washington, US [Lucas Jackson/Reuters]

The White House has been fortified with new fencing and extra security precautions. Most businesses around the downtown area have their windows boarded shut.

The mood across the capital seemed jubilant. The White House said the president had no public events scheduled for Saturday. It was unclear if behind the new fence he could hear the crowds filling the city, at one point chanting: "This is what democracy looks like."

Protests against racism continue in the US nearly two weeks after George Floyd, an African American, died in Minneapolis after a white police officer pinned him to the ground and kneeled on his neck.

In Washington, protestors chanted "Black Lives Matter" near the White House in one of the largest demonstrations since the incident on May 25.

In New York, more than 20 protests were held across the city, with about 2,000 people gathering in Union Square in Manhattan.

The demonstrators carried placards which read "We Want Justice" and chanted "No to Racism."

A church in North Carolina near Floyd's birthplace held a memorial service for him.